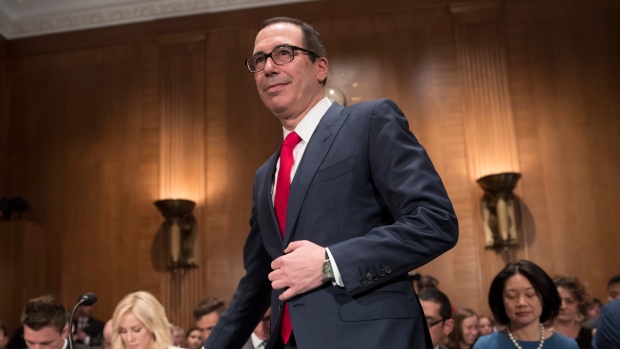 The administration has previously expressed support for some return of the Glass-Steagall Act, which established a firewall between investment and commercial banking. But Mnuchin was explicit before the Senate Banking Committee that that vision did not include breaking up large banks that engage in both.

"We do not support a separation of banks from investment banks. We think that would be a very significant problem for financial markets and the economy," he said.

The administration's exact position on Glass-Steagall's potential return has been unclear. A call to reinstate the 1933 law was included as part of the official Republican Party platform during the 2016 presidential campaign. And the administration has repeatedly said it supports its return when asked since winning the White House.

Gary Cohn, the former Goldman Sachs executive who now leads the president's National Economic Council, also expressed openness to the idea in a private April meeting with senators. And Mnuchin himself said he support a modernized version of that law during his confirmation hearing before senators in January.

But Mnuchin insisted Thursday that his call for a modernized version of that law does not include a strict firewall that would break up some of the biggest names on Wall Street.

"There are aspects of it that we think may make sense. We never said before we support a full separation of banks and investment banking," he said. "I've never said we're in favor of breaking up the banks.

Mnuchin did not detail exactly what portions of the law he thought should return, and the party's official platform simply called for a full reinstatement of the former law.

Wall Street banks do not seem overly concerned the Trump administration will force them to break up.

"I think they mean - what you hear is that - they have a differentiated set of rules and regulations for smaller, less complex institutions and bigger, more complex institutions. And we agree with that," Bank of America Corp CEO Brian Moynihan told CNBC Thursday.

Senator Elizabeth Warren, a Massachusetts Democrat who is a frequent big bank critic, expressed confusion and disbelief over Mnuchin's stance.

"There are aspects of Glass-Steagall you support, but not breaking up the banks," she said. "What do you think Glass-Steagall was, if that's not right at the heart of it?"

Mnuchin also said a goal of three per cent economic growth is achievable if the United States makes historic changes in taxes and regulation.

He says 100 people at his department are working on overhauling the tax system -- and the Trump administration's goal is to bring "meaningful relief" to the middle class and makes American businesses competitive.

Mnuchin says the Treasury Department is preparing a report on regulatory changes for the finance system. He says it'll be broader than undoing much of the Dodd-Frank law enacted under President Barack Obama.

Mnuchin says the report will focus on providing relief to community banks.

- with files from The Associated Press