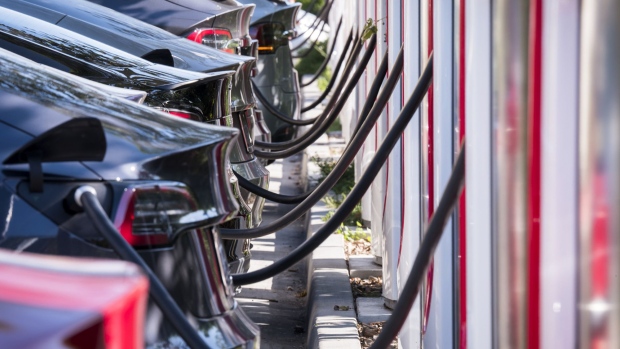 (Bloomberg) -- Tesla Inc. can disproportionately benefit from the U.S. infrastructure package, and investors in the auto sector risk losing out if they don’t own the stock, Morgan Stanley said.

The Biden administration proposes allocating $174 billion to develop the country’s electric-vehicle ecosystem, which could enhance Tesla’s advantage over legacy car companies and even some new entrants, analyst Adam Jonas wrote in a note Wednesday. However, he warned that the development may happen in a volatile fashion, bringing in some near-term uncertainties that might differ from year to year.

“It will likely be complicated by a labyrinth of national and local laws that will present advantages and disadvantages to various automakers, depending on the year that you choose to analyze,” Jonas said. Yet over the long term, “auto investors face greater risk not owning Tesla shares in their portfolio than owning Tesla shares in their portfolio.”

The Elon Musk-led company, which is indisputably the current global market leader in EVs, reported surprisingly strong delivery numbers for the first quarter earlier this week, even as most carmakers are struggling with a chip shortage that has forced production halts. Despite that, Tesla shares have been stuck in a rut over the past month and are down about 3% this year. The stock rose 743% last year.

The bill, which includes purchase incentives, development of charging infrastructure and grid enhancements, would be good for Tesla, which has a higher volume of EV products in the pipeline than most manufacturers, according to Jonas.

Morgan Stanley has a buy-equivalent rating on Tesla and a price target of $880. The average analysts’ target on the stock is $651, with 17 buy recommendations, 13 holds and 12 sells.