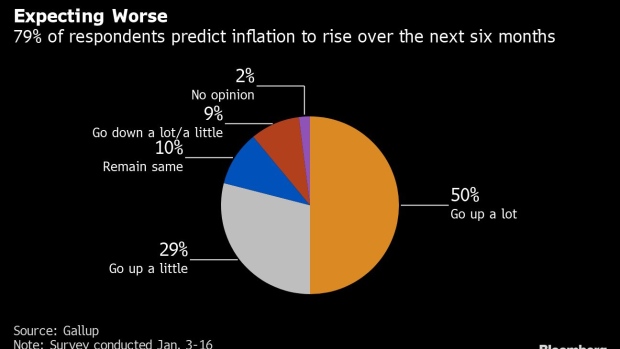 Customers shop at the Trader Joe's Upper East Side Bridgemarket grocery store in New York, U.S., on Thursday, Dec. 2, 2021. The century-old vaulted market under the Queensboro Bridge has reopened on Thursday as a Trader Joe's. , Bloomberg

(Bloomberg) -- Nearly 8 in 10 Americans expect inflation to increase over the next six months, according to a Gallup poll released Wednesday.

Half of the adults surveyed Jan. 3-16 predicted inflation would go up by “a lot” over the period. When asked about the U.S. economy more broadly, two-thirds of respondents say it’s getting worse, not better.

Gallup says respondents have always been more likely to say inflation will rise rather than fall, but the current reading of 79% is the highest in data back to 2001. Still, just 8% of respondents named inflation as the nation’s top problem -- well behind concerns about the government and the Covid-19 pandemic. Even so, that’s the highest share since 1985.

Earlier this month, government data showed consumer prices rose 7% in December from a year earlier, the fastest pace in nearly four decades. The rapid increases have eroded workers’ paychecks and driven up the cost of everyday essentials.

A related Gallup survey, conducted Jan. 3-13, showed 49% of Americans said rising prices have caused hardship for their family. That’s up from 45% in November.

Lower-income Americans reported suffering the most from inflation. Two-thirds of U.S. adults with an annual household income of less than $40,000 said they had experienced financial hardship related to recent price increases.

Nevertheless, Americans remain upbeat about the labor market. Some 72% of respondents said it’s a good time to find a quality job, just below the record seen in October.