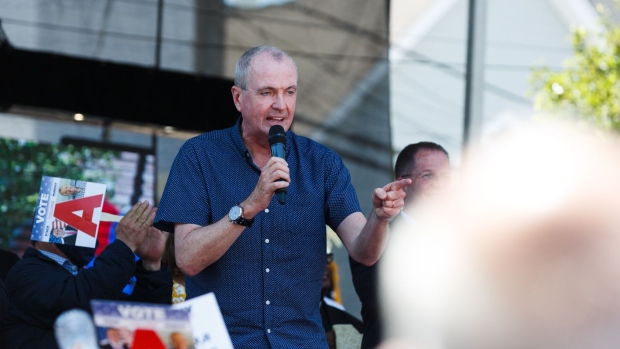 (Bloomberg) -- New Jersey Governor Phil Murphy’s lead narrowed against challenger Jack Ciattarelli in the final days of campaigning ahead of the Nov. 2 election, according to a new Monmouth University poll.

Half of registered voters support Murphy, giving the Democratic incumbent an 11-point lead over Republican Ciattarelli, according to the Oct. 21-25 survey of registered voters released on Wednesday. While Murphy maintains a sizable lead over the former assembly member, the margin has shrunk by five points since Monmouth’s August poll.

One reason: Support among voters age 65 and older dropped to 48% in October from 53%. Taxes remain New Jersey voters’ top issue, followed by jobs and the economy, schools and the pandemic. Ciattarelli’s one advantage over Murphy is on taxes, where he leads 39% to 29% in the Monmouth survey, which sampled 1,000 registered voters. The poll has a margin of error of plus or minus 3.1 percentage points.

A number of televised debates and advertising blitzes has also helped boost support for Ciattarelli, though the last-minute support is unlikely to tip the scales, said Patrick Murray, director of the independent Monmouth University Polling Institute.

“Ciattarelli has chipped away at Murphy’s lead but hasn’t delivered the knockout he needs,” Murray said. “Even if we figure in potential error margins for these partisan group results, Ciattarelli cannot win this race based on registered Republicans and unaffiliated voters alone. That outcome would require a pretty sizable collapse of Democratic turnout.”

Murphy has acknowledged the race is his to lose. Other polls show a narrower lead for Murphy: A Oct. 15-18 Emerson poll gave Murphy a six-point lead over Ciattarelli among likely voters.

“The big factor for us will be turnout,” Murphy said in an interview earlier this month. “Our team is bigger than their team. If our team shows up, we win. If it doesn’t, it’s a coin flip.”

If Murphy wins re-election next week, he would be the first New Jersey Democrat to win a second term in four decades. The race is drawing fundraising dollars from around the country as contests in New Jersey and Virginia -- the only U.S. states holding governor races this year -- could provide early indicators of how Democrats will fare in the 2022 midterm elections.