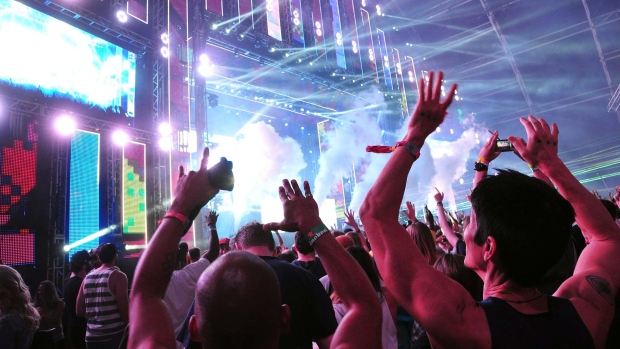 A 200-strong coterie of mostly men gathered in the Poconos Mountains earlier this month to engage in what some regard as this pandemic era’s ultimate taboo: a bacchanalian party. The Utopia music festival took place over the Labor Day holiday weekend (Sept. 4-7) in Pennsylvania, where open-air gatherings are currently capped at 250 people.

The event also served as a potential new model for the future: All attendees were screened with a COVID-19 test a few days before the event—and again at the door—in an effort to create an event “bubble.”

The viability of large music festivals in the midst of a global pandemic remains hazy—such landmark events as Coachella, Glastonbury, and Lollapalooza have all been struck from this year’s calendar, and an estimated US$5 billion in ticket sales was lost in the U.S. just in the summer. If available, most Americans will not be able to get a vaccine until well into 2021.

But mass testing is catching on: Last week, the founder of Croatia’s Lighthouse Festival launched a 60-second, gargling-based COVID-19 test that is currently available over the counter in Austria. Ravel Hotel in New York made waves over the summer by offering rapid tests to revelers at its crowded rooftop parties. In a recent “Global Nightlife Recovery Plan” report released by nightlife consulting group VibeLab, 90-minute tests are cited as a potential method to screen guests at festivals and clubs.

“As the weather gets colder, and outdoor events are no longer feasible, testing is one of the safest solutions for throwing events,” says VibeLab’s co-founder Lutz Leichsenring, a former spokesperson for the Berlin Club Commission. Other technologies the consulting group is researching include industrial-grade ventilators and contract tracing.

While the additional expenses and effort of testing may be prohibitive to many attendees and organizers, the freedom that waits on the other side makes it worthwhile for some partygoers.

In the gray area of official government policy—is testing a viable solution for the safer reopening of live events, or just a risky stopgap?—Tested Contained Retreats LLC (TCR) presents itself as the answer. The Delaware-based COVID-19 consultancy and production service launched in July at the electronic dance music festival In My Elements. The “boutique retreat with advance two-part testing” was also held outdoors in Pennsylvania.

Utopia organizer Jake Resnicow chose them, he says, because TCR invested more than US$60,000 in legal, health, and safety research to ensure it was complying with state and federal health guidelines. (TCR and Elements share the same management team, and did not respond to questions about medical backgrounds.)

Here’s how it worked: A few days before the event, staff and guests were required to visit verified medical facilities in multiple locations; RT-PCR tests, which detect the virus’s genetic material, were administered via nasal swab and sent to a lab. Guests could alternatively request a US$150 mail-in test kit from Vault, with tests monitored by medical professionals via Zoom.

Results were sent directly to the festival to remove the chance they could be forged. To try to eliminate false negatives, a second test was administered on the day of the festival. When cars arrived on-site, they were spaced six feet apart in a quarantine area where staff administered a 15-minute rapid test called Sofia 2 SARS Antigen FIA, manufactured by Quidel. (Rapid tests are less accurate than RT-PCR tests, especially for asymptomatic cases, but the trade-off is speed.)

At Utopia, according to Resnicow, two ticket-holders tested positive for the virus in the initial round, and four others were turned away at the door, having either tested positive or having arrived in a vehicle with someone who did. Full refunds were issued.

“We’re getting people tested who would not necessarily get tested otherwise,” says Resnicow. “I believe, in many of these cases, they were asymptomatic and would not have otherwise known, so this is really important.”

Requiring COVID-19 testing is a significant financial undertaking that might not make sense for DIY events with tight budgets, or for large festivals such as Coachella, whose guests don’t stay on-site. The crux of the two-stage approach is to create a virus-free “bubble” whereby screened staff and attendees are effectively removed from all outside contact for the duration of the event.

Before the pandemic, Resnicow estimates that his staffing costs typically came to 10 per cent of the total budget, with a 25:1 guest-to-staff ratio. For Utopia, costs more than doubled, to 22 per cent, with a 3:1 guest-to-staff ratio necessitated by safety protocols and a decision to give attendees some “extra TLC.” His net profit margin was 8 per cent, compared to an average of 30 per cent before the pandemic. The festival also donated US$50 from every ticket to a nightlife grant program.

Resnicow estimates that TCR’s fee ate into 30 per cent of his budget, but declines to provide a dollar amount. With tickets ranging from US$699 to US$1,999 for three nights of accommodations and activities, given his stated margins, quick back-of-the-envelope math pegs the cost above US$33,000 for 200 attendees.

“It was not a money-making endeavor,” says Resnicow. “I look at it as a long-term investment in our future.” (A similar Halloween weekend event is already in the works.)

Known for his LGBTQ+ parties in New York, Las Vegas, and Miami, the promoter admits that he received pushback from some who think partying is a non-essential activity that can wait. While he might be reducing the risk through testing, it’s still a risk he creates by staging the event. In this pandemic, personal risk is community risk.

Resnicow points out that large crowds are gathering for private parties and illegal events all over the country. He considers the lack of official guidance from state and federal obstacles to getting things aboveboard.

“If it’s going to happen anyway, let’s do it with the strictest protocols and keep everyone safe,” says the New York-based producer, who turned toward health and testing policies from the film and restaurant industries. A similar, two-stage testing regimen is being developed by cruise lines to get ships back on the water.

“I don’t think there’s enough guidelines,” Resnicow continues. “I don’t think [the city] is doing enough, and would welcome the opportunity to meet with [officials] to share our learnings and data.”

Asked for comment as to whether this sort of two-stage setup could be applied beyond outdoor festivals to clubs themselves, New York City’s Office of Nightlife referred questions to the city’s Department of Health. A Department of Health spokesperson stated via email that “a COVID-19 test result can be a great way for New Yorkers to know their status,” but fell back on the standard mantra: Wear masks, social distance, wash hands, and stay home when you’re feeling ill.

According to an Association of Public Health Laboratories report issued on Sept. 2, the Food and Drug Administration has authorized antigen rapid-tests such as the one used by Utopia and Elements only for use on symptomatic patients. Clinicians can use these tests off-label on asymptomatic patients, but they are considered to be “screening” tests and are not diagnostic by nature, as they can produce both false negatives and false positives.

“There’s a difference between legal and ethical,” says Josh Appelbaum, a member of New York-based DJ collective Occupy The Disco. “There’s an ‘If I build it, they will come’ mentality about nightlife, and people are looking for someone to say x, y, or z is OK, especially with a lack of forward guidance at the local or federal level.”

But, he continues, “It’s really hard to do harm reduction for COVID at events like concerts or music festivals. People are under the influence, their inhibitions are lowered, and the likelihood of them maintaining physical distance is highly diminished.” (Exhibit A: the infamous Chainsmokers concert in the Hamptons.) “All it takes is one person to come in with a false negative test to get everyone sick.”

For Utopia attendee Julius Anthony Rubio, though, that level of concern fades quickly. He says, “It was great once you got past the gates—to finally let go.”