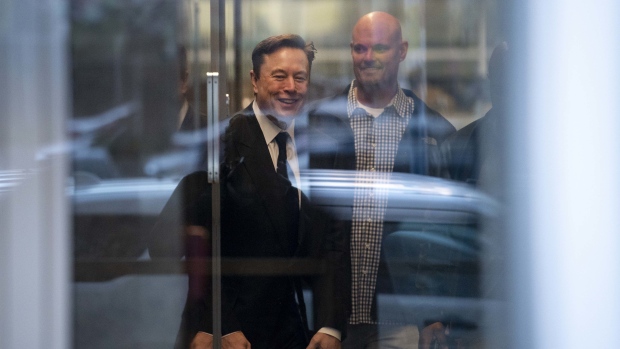 (Bloomberg) -- Elon Musk told a jury he was confident he could have pulled off his proposal 4 1/2 years ago to take Tesla Inc. private, saying he never has trouble raising money for his companies.

The chief executive officer, in his third day on the witness stand, was defending the legitimacy of his assertion in an August 2018 tweet that he had “funding secured” for the take-private transaction.

“Every financing round I’ve had has been oversubscribed,” he testified Tuesday in San Francisco federal court in response to friendly questions from his own lawyer. “It’s not a problem for me to raise money. I’ve done a good job for investors and if you do a good job, they give you money.”

In addition to Tesla, Musk runs SpaceX, the closely held rocket-ship company; he co-founded OpenAI Inc., the company most famous for developing the artificial intelligence tool ChatGPT; and he acquired Twitter Inc. in October for $44 billion.

Musk spent most of his approximately four hours on the stand the previous day facing off with a lawyer for investors who claim the billionaire’s Twitter posts in August 2018 were misleading — and caused shareholders who made bets on his tweets to suffer big losses.

While investor attorney Nicholas Porritt was trying to show that the short-lived take-private proposal was empty, lacking the most fundamental details, Musk told jurors he was certain about the funding. He testified about the possibility of using his holdings in SpaceX to help finance the transaction, along with a multibillion-dollar commitment by Saudi Arabia’s sovereign wealth fund.

Musk also said that his actual language in the tweet on Aug. 7, 2018 — “Considering taking Tesla private” — was not the same as saying “the deal will be done.”

He said Tuesday the aim in his tweets was to be transparent and “do the right thing” with Tesla shareholders.

“I’m making it very clear that either scenario is possible,” he said. “We may go private or we may not.”

Musk testified that Dan Dees, a Goldman Sachs Group Inc. executive who he’d been talking to about the take-private plan, was very complimentary about how Musk explained his rationale in a Tesla blog post on the same day as his tweet.

“I thought your letter today was excellent,” Dees wrote to Musk in an email that was shown to the jury. “Very clear. At GS we are standing by and ready to help. Call me anything – 24/7.”

He testified that he “withdrew all commercial banking business from JPMorgan, which to say the least made JPMorgan hate Tesla and me.”

Musk generally performed stronger as a witness Tuesday than he did Monday, when he confessed in court that he’d gotten a poor night’s sleep and complained in his fourth hour on the stand that he was suffering from back pain.

Porritt wasn’t able to land as many blows to Musk’s narrative in the final hour of the CEO’s testimony Tuesday before he was excused.

But Porritt did get Musk to grudgingly acknowledge that he never got commitments for specific funding amounts for the Tesla take-private transaction from the Saudi fund — or any bank or person.

“Not a specific number,” Musk said. He’d previously testified he believed the Public Investment Fund’s support was “unequivocal,” and added Tuesday that “PIF can take Tesla private 150 times over.”

Musk was also confronted over his failure to mention the possibility of tapping into SpaceX shares when he submitted a written explanation to the court in 2021 about the state-of-play for financing the take-private deal in 2018. Musk said Tuesday that he’d mentioned SpaceX to the Securities and Exchange Commission in its 2018 probe of the tweets, but forgot to bring it up in the current case before Monday.

“It was an error on my part in not mentioning it here,” he said.

Later, Tesla’s head of investor relations, Martin Viecha, testified that Musk’s tweets triggered a barrage of queries to him about whether “this a real event or is this made up.” He said that before the tweets came out, he had no experience with privatization in his previous work as a side-sell analyst.

Viecha said he told many investors the take-private plan was indeed a “firm offer,” but didn’t clear that language with Tesla’s chief financial officer or others at the company.

“It was my understanding that Saudi PIF would be taking over the company,” Viecha testified. “I don’t actually know if there was a commitment letter or if there was a verbal agreement.”

(Updates with testimony by Tesla’s head of investor relations)