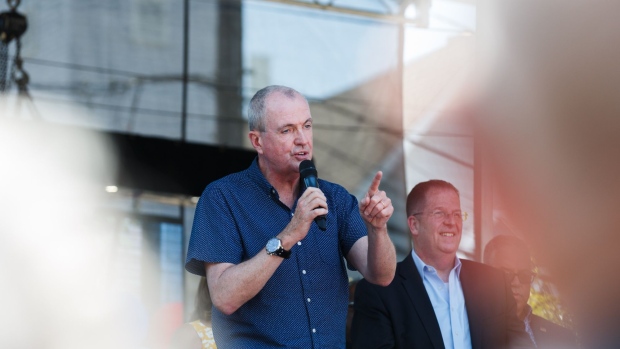 Phil Murphy, New Jersey's governor, speaks during a 'Get Out The Vote' rally in Union City, New Jersey, U.S., on Saturday, June 5, 2021. The 2021 New Jersey gubernatorial election will take place on November 2, 2021, to elect the governor of New Jersey. The primaries will be held on June 8. , Bloomberg

(Bloomberg) -- The Republican minority in New Jersey’s legislature criticized Democratic Governor Phil Murphy for not disclosing what he plans to do with billions of dollars in unexpected revenue. The money should go to the pension, taxpayer relief and other long-term relief from the state’s high expenses, they said.

Their remarks, in a streaming press conference, came after cancellations this week of scheduled Assembly and Senate hearings on Murphy’s $45 billion spending plan for the fiscal year that starts July 1. On Wednesday, state Treasurer Elizabeth Muoio announced that New Jersey was heading toward record revenue, pushing forecasts $5.1 billion beyond an estimate four months ago.

Muoio was to appear at both hearings, but both were canceled by legislative leaders without giving a reason. The Republicans said they suspected that the administration and Democratic lawmakers were coming up with spending plans without them.

New Jersey is among several states, including California and Texas, with unexpectedly robust revenue, fueled by brisk retail sales and income taxes from high earners. As of February, at least 29 states had collected revenue equal to or in excess of pre-pandemic figures. States and cities also are receiving a total $350 billion in aid from the American Rescue Plan Act.

Senator Declan O’Scanlon of Little Silver said the money should be used to make a pension payment higher than the $6.4 billion pledged by Murphy for 2022, the first time New Jersey would make the full actuarially required contribution in more than two decades. Senator Sam Thompson of Old Bridge advocated for “a group of people out there who have been forgotten: retired public employees who have not received a cost-of-living raise since 2008.”

Another senator, Michael Testa of Vineland, said Republicans “are being shut out” of budget negotiations and a chance to speak to Muoio.

“They’re hiding their treasurer from us because they’re quite frankly concerned about the questions we’re going to ask in those hearings,” Testa said.

“The surplus should be given back to taxpayers because it is theirs to keep, and the state is already flush with cash,” Wirths said in a statement.