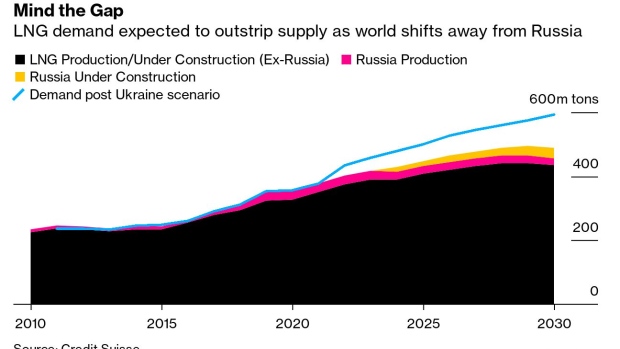 (Bloomberg) -- The liquefied natural gas market is hurtling toward a potentially historic shortage this winter as the world rushes to secure the super-chilled fuel.

Europe’s plan to cut imports of piped Russian gas by two-thirds by the end of the year and replace it with LNG from the US and Africa is sharply intensifying competition for the power-plant and heating fuel. There’s also an expectation that China’s battle with Covid-19 will be winding down later in 2022, which should stoke industrial demand from Asia’s biggest economy.

In a normal year, LNG importers stock up on supplies for the peak winter season over the summer. That appears to have started earlier this year, with South Korean and Japanese utilities already snatching up shipments for delivery through early 2023. The looming supply crunch risks pushing up electricity bills and inflation and could see poorer nations miss out entirely.

“This coming winter has everyone on edge,” said James Whistler, the global head of energy derivatives at Simpson Spence Young. “All things point to tight supply under normal conditions, but additional risks are also present.”

How to cope with the widening gap between supply and demand will be the hot topic at the World Gas Conference in South Korea this week. It’s the first major gathering of the industry in Asia since Russia’s invasion of Ukraine upended the LNG trade and sent prices surging.

Global demand will hit 436 million tons in 2022, outpacing 410 million tons of available supply, Rystad Energy said in a note this month. Although soaring consumption has spurred the greatest rush of new projects worldwide in more than a decade, most new supply will only come online after 2024, it said.

Traders are diverting LNG shipments away from Asia, and choosing to sell into Europe instead where prices are more attractive. Germany is fast-tracking the construction of floating import terminals, with the first one slated to start as soon as this year. In the meantime, however, it will turn to the tight spot market, likely at the expense of developing nations like India and Pakistan.

European gas prices have eased from a peak in early March shortly after the invasion of Ukraine, but are still well above average levels for this time of year. The declines may give the region’s buyers more scope to replenish stockpiles in the next few months, but a lot will depend on how quickly Chinese demand comes back.

The world’s top LNG importer is shopping around for spot shipments of the fuel after months of absence in anticipation of a rapid bounce back when virus restrictions are eased. Still, many Chinese importers are reluctant to lock in deals, since consumption still remains subdued, which may lead to a sharp upsurge in buying later in the year.

“Strong LNG demand in Europe is certain, but the wildcard is China where current demand remains weak given ongoing Covid-19 lockdowns and slowing economic growth,” said Valery Chow, the Asia-Pacific head of gas and LNG research at Wood Mackenzie Ltd. “The market will tighten going into winter as European and North Asian buyers compete for volumes.”