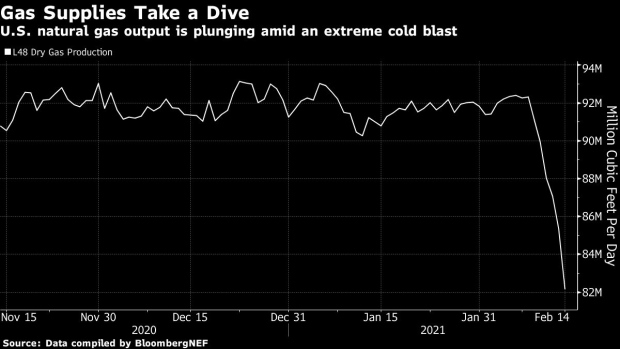 (Bloomberg) -- Natural gas for physical delivery in the U.S. was trading for as much as $500 per million British thermal units on Monday as demand for the heating and power plant fuel soared amid a deep freeze.

Gas at two hubs in the U.S. Midcontinent was trading at $500 per mmBtu and went for $240 at a third on Monday, according to traders. Spot gas has been trading for hundreds of dollars across the central U.S. since Thursday with a surge in heating demand triggering widespread blackouts and sending electricity prices soaring. The fuel normally trades in the region for less than $3 per mmBtu.

“It’s a shocking situation,” said Cody Moore, head of gas and power trading at Mercuria Energy America LLC. “It’s chaos. It’s crazy with the prices.” Mercuria booked hotel rooms for some of its employees in the Houston area so they could walk to the office instead of driving on icy roads. “Our first priority was to do whatever we can to keep the grid moving, the gas flowing properly, clients informed and regulatory agencies updated where required,” Moore said.

Among other news in U.S. gas markets Monday: