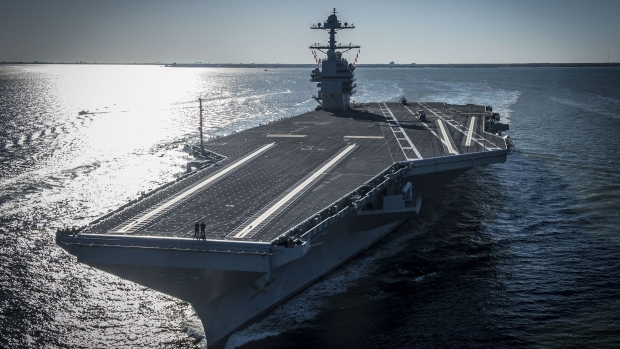 The combat system for the Navy’s newest and costliest warship, the US$13 billion Gerald R. Ford, “has yet to demonstrate that it can effectively” defend the aircraft carrier from anti-ship missiles and other threats, according to a new assessment by the Pentagon’s testing office.

Mixed performance by missile interceptors, radar and data dissemination systems on a testing vessel limited the ability to destroy replicas of incoming weapons even though sensor systems “satisfactorily detected, tracked and engaged the targets,” according to the report obtained by Bloomberg News in advance of its release.

The carrier built by Huntington Ingalls Industries Inc. is still dogged as well by the “poor or unknown reliability” of its aircraft launch and recovery systems, according to the five-page report. And recent shock tests to assess the vulnerability of key systems “identified several design shortfalls not previously discovered,” the testing office said. It said “the Navy has already identified several survivability” opportunities to improve the four-carrier class of ships “against underwater threat engagements.”

The persistent shortcomings undercut the Navy’s hope to showcase the Ford as the first in a new class of nuclear-powered carriers that can project U.S. power globally and are more combat-capable, reliable and affordable to operate then the Nimitz class it’s replacing. The latest assessment raises new questions for Pentagon officials and lawmakers about how fully the Navy will demonstrate improvements before the Ford is deployed in mid-September on its first patrol with aircraft and escort vessels.

The report, which contains unclassified and “controlled unclassified” information and has been circulated to the Navy, found that “only a limited assessment” of the combat system’s effectiveness is possible at this point. It said Nickolas Guertin, the new head of the testing office, plans to send Congress an interim report on the Ford’s self-defense capabilities by Sept. 30.

The Naval Sea Systems Command said in a statement that it “welcomed the opportunity to review and provide comment on” the assessment draft. “Overall,” it said, recent post-delivery testing of the Ford “indicate the risk of system reliability impacting mission accomplishment is decreasing.”

Answering concerns about the Ford’s defense system -- with its dual-band radar, data fusion and other advanced capabilities -- takes on added urgency as China increases its inventory of patrol boats, frigates, cruisers and conventional submarines with advanced anti-ship cruise missiles.

The Navy’s three tests so far of the Ford’s self-defense system on board a specialized vessel designed to evaluate performance were “not adequate to assess the combat system’s capability against supersonic antiship cruise missiles and subsonic maneuvering missiles, and there were no future test events planned against threats that could provide additional data,” according to the testing office.

After a series of additional evaluations and exercises with the Ford’s air wing, the plan is for the carrier to “to visit multiple theaters of operation with multiple allies” by the end of summer, Rear Admiral James Downey, the Navy’s program executive officer for aircraft carriers, told reporters Friday.

He said the Navy is confident in the vessel’s combat systems. “She’s been engaged against her required threats and we’ve done those tests at sea, they’ve been evaluated and she’s achieved her certification in the combat systems area,” Downey said.

The testing office said the Ford is unlikely to achieve its goal for the number of sorties it can launch over a 24-hour period, saying it’s “based on unrealistic assumptions.”

It also said that during 8,157 takeoffs and recoveries through last year, the carrier’s new electromagnetic catapult system made by General Atomics demonstrated a reliability of 272 launches “between operational mission failure,” or “well below” its required 4,166. Similarly, its system to snag landing aircraft  demonstrated a 41-landing reliability rate “well below the requirement of 16,500,” the testing office said.

The Naval Sea Systems Command said that during the Ford’s recent at-sea phase, the carrier “completed all required testing, accomplished work ahead of plan, improved system reliability for new technologies and served as an East Coast platform for conducting pilot carrier qualifications for over 400 newly qualified and re-qualifying pilots.”