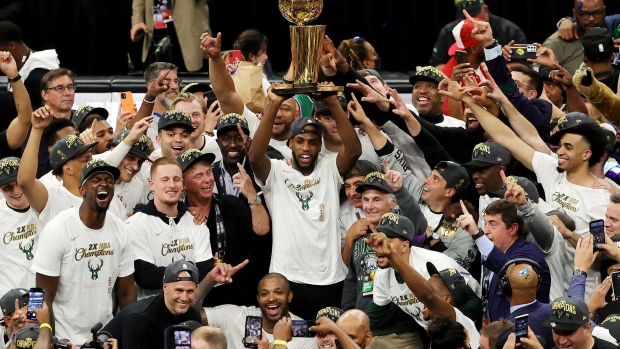 MILWAUKEE, WISCONSIN - JULY 20: Khris Middleton #22 and members of the Milwaukee Bucks celebrate after defeating the Phoenix Suns in Game Six to win the 2021 NBA Finals at Fiserv Forum on July 20, 2021 in Milwaukee, Wisconsin. NOTE TO USER: User expressly acknowledges and agrees that, by downloading and or using this photograph, User is consenting to the terms and conditions of the Getty Images License Agreement. (Photo by Jonathan Daniel/Getty Images) , Photographer: Jonathan Daniel/Getty Images North America

(Bloomberg) -- The NBA Finals pitting the Milwaukee Bucks against the Phoenix Suns averaged 9.91 million viewers on ABC, a 32% jump from the 2020 series held during the depths of the pandemic.

The sixth game, which saw the Bucks clinch their first NBA title in 50 years, drew an audience of 12.5 million -- up 50% from last year’s matchup between the Los Angeles Lakers and the Miami Heat.

Though this year’s event featured smaller-market teams, it may have made for better television than a 2020 series held in a pandemic “bubble” in Florida. Last year’s finals also faced more competition for viewers since multiple pro sports restarted their seasons around the same time following a Covid-19 pause. Also, fewer fans watched the series at bars in 2020.

Tuesday’s Game 6 also attracted the best ratings in Milwaukee and Phoenix in 25 years on ABC, part of Walt Disney Co.