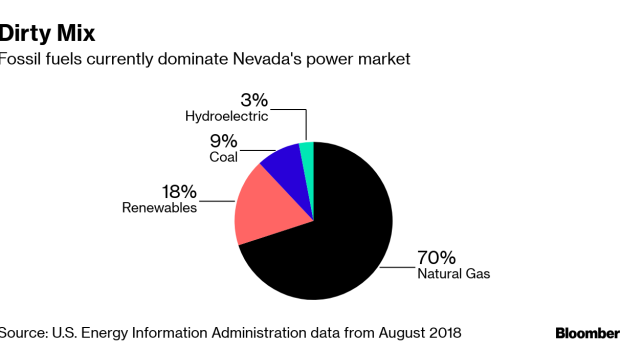 (Bloomberg) -- Nevada is joining the growing list of U.S. places that aim to ban fossil fuels from its electricity supply.

Nevada Governor Steve Sisolak, a Democrat, is set to sign a bill Monday that sets a goal of getting all of the Silver State’s power from carbon-free sources by 2050 and requires 50 percent of its supply to come from renewables by 2030.

Nevada becomes the fourth U.S. state to commit to 100 percent clean energy, joining its bigger neighbor California as well as Hawaii and New Mexico. Other states considering legislation that would rid their grids of carbon include New York, Washington, Illinois and Massachusetts. The U.S. territory of Puerto Rico also moved this month to get its electricity from renewable sources by 2050 and more than 100 cities and towns have made a similar pledge including Chicago, according to the Sierra Club.

The push comes as solar and wind power has become more affordable while the price for batteries, which can help make renewable energy more reliable, has plunged more than 80 percent since 2010, according to BloombergNEF. The state and local efforts are in stark contrast to the Trump administration’s moves to ease environmental regulations to help fossil-fuels while backing away from climate targets. Opponents of the green energy push have raised concerns about higher costs for consumers.

Nevada currently requires utilities to get 25 percent of their power from renewable energy by 2025.

To contact the editors responsible for this story: Lynn Doan at ldoan6@bloomberg.net, Will Wade, Steven Frank