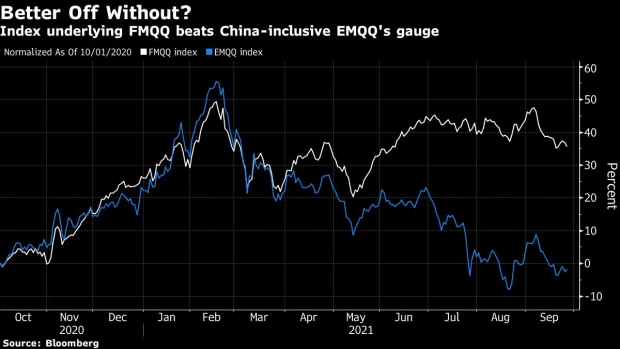 (Bloomberg) -- Investors wary of Chinese stocks are getting a new way to bet on the rise of the internet and e-commerce in developing economies.

Even so, the fund’s founder Kevin Carter says the new ETF is more about giving investors options than avoiding the world’s second-biggest economy.

“We’re not giving up on China, and we think everyone has greatly overreacted,” he said in interview. Still, “we know people are afraid of China, and if they can’t stomach it, then here’s a way for them to participate.”

Carter says the new fund is meant to complement another ETF he launched in 2014, the Emerging Markets Internet and Ecommerce ETF (EMQQ). That $1.3 billion fund is the best-performing U.S.-based emerging-market ETF tracked by Bloomberg over the past five years.

While the China-heavy index underlying EMQQ is down almost 21% so far this year, the China-free gauge tracked by FMQQ shows a 4.8% return for the same period, according to data compiled by Bloomberg.

The new fund will follow the same investment goals of EMQQ, aiming to cash in consumer trends among younger, more tech-savvy generations living in developing economies, according to Carter.

“In terms if e-commerce, there’s nobody more developed than China,” Carter said. In the rest of the emerging world, “you have four times as many people and one-fifth of the e-commerce penetration rate.”