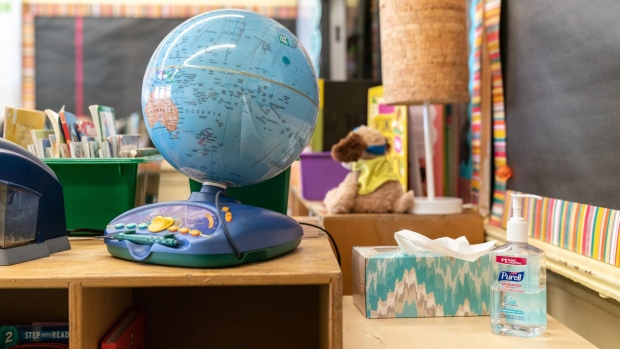 A bottle of hand sanitizer sits next to a globe in a classroom at New Bridges Elementary School in the Brooklyn borough of New York, U.S., on Wednesday, Aug. 19, 2020. New York City's public schools can hold in-person classes this fall, Governor Andrew Cuomo announced, paving the way for the district to become the only major U.S. system to open its doors despite growing unease among teachers, administrators and parents. , Bloomberg

(Bloomberg) -- The US Supreme Court turned away a challenge to New York’s requirement that schoolchildren be vaccinated against serious diseases, refusing to question the state’s 2019 repeal of its longstanding exemption for families with religious objections.

The justices without comment left in place a state court ruling that said New York wasn’t targeting religion when it eliminated the exemption after the worst measles outbreak in a quarter century. The vaccine requirement applies to children under 18 in both public and private schools.

The rebuff is consistent with the Supreme Court’s handling of cases involving Covid-19 vaccines. The justices have let state and local government impose shot requirements even without the type of religious opt-out the court has required in other contexts -- for example, with regard to Obamacare’s contraceptive mandate.

A group of parents challenged the 2019 repeal, saying it violated their rights under the Constitution’s First Amendment and was driven by anti-religious bias. They faulted the state for removing the religious exemption while allowing other people -- including students over 18, adults who work for schools and children with medical exemptions -- to go unvaccinated.

The parents said they were forced to either violate their religious beliefs or home-school their children.

“The results are devastating -- tens of thousands of children have been deprived the ability to attend school without violating their sincerely-held religious beliefs,” the parents argued.

New York first required schoolchildren to be vaccinated in 1860. It’s currently one of six states -- along with California, Maine, Mississippi, West Virginia and Connecticut -- not to have a religious opt-out, according to the challengers.

New York officials urged the Supreme Court not to hear the appeal, saying the vaccination rules are religiously neutral and serve an important public-health function. The state said the rate of religious exemptions had increased by 65% over the previous several years, with some schools granting opt-outs to more that 20% of their students.

A New York state appeals court upheld the repeal. The state’s highest tribunal, the Court of Appeals, refused to take up the case, clearing the way for the appeal to the US Supreme Court.