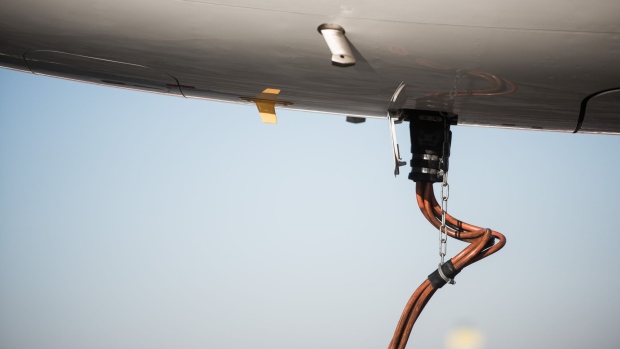 A refueling pipe sits connected to the tank of an Airbus A321-231 passenger aircraft, operated by Wizz Air Holdings Plc, at Liszt Ferenc airport in Budapest, Hungary, on Monday, Jan. 9, 2017. Wizz Air, the No. 1 no-frills carrier in Eastern Europe, grew passenger numbers 19 percent to 23 million as it added more destinations in the west of the continent. Photographer: Akos Stiller/Bloomberg , Bloomberg

The Ministry of Business, Innovation and Employment was informed of a potential impact to supply at Auckland Airport after testing of a particular shipment raised concerns, said Paul Stocks, a deputy secretary at the ministry. Fuel companies have advised that they expect new fuel to be available from Dec. 18, he said.

“In the meantime fuel suppliers have started to ration fuel to ensure supply through until new supply is available,” Stock said. “Airlines are working hard to minimize the impact on customers and we expect they will advise customers of any impacts once these are better understood.”

The risk of fuel shortages comes as New Zealand approaches its annual summer vacation period, when thousands of people travel domestically to spend time with family and friends. At the same time, the South Pacific nation is expecting an uplift in foreign visitor arrivals as its border is open for the first summer in three years.

New Zealand receives jet fuel via an import terminal at Marsden Point, north of largest city Auckland. The particular shipment was brought in by Z Energy, which is one of three suppliers, according to local media reports.

Air New Zealand is “working closely with our fuel partners to understand the challenges being faced at Marsden Point and how they will affect our fuel supply,” said Chief Operational Integrity and Safety Officer David Morgan. “At this stage there are no changes to our current schedule.”

Airlines are urgently working on solutions and will do all they can to solve problems before they cancel flights, the Board of Airline Representatives of New Zealand said.

“Members have begun to receive advice from their suppliers that they will receive 75% of what they had planned to use out of Auckland Airport,” said BARNZ Executive Director Cath O’Brien. “They are working with that information and designing solutions.”