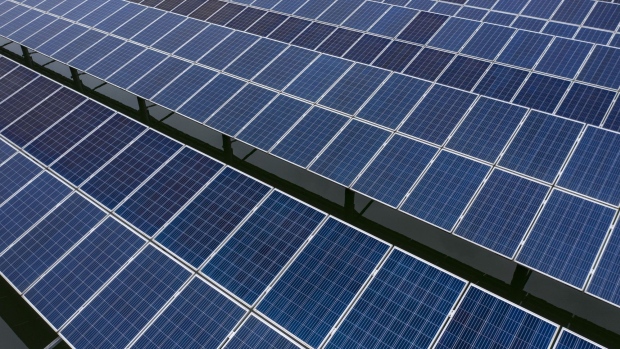 Photovoltaic panels stand in a floating solar farm in this aerial photograph taken on the outskirts of Ningbo, Zhejiang Province, China, on Wednesday, April 22, 2020. China's top leaders softened their tone on the importance of reaching specific growth targets this year during the latest Politburo meeting on April 17, saying the nation is facing "unprecedented" economic difficulty and signaling that more stimulus was in the works. Photographer: Qilai Shen/Bloomberg , Bloomberg

(Bloomberg) -- NextEra Energy Inc. expects as much as 2.8 gigawatts of solar and storage projects to be delayed due to the U.S. trade investigation into Chinese panel suppliers.

About “2.1 GW to 2.8 GW of 2022 solar and storage projects may shift to 2023 due to circumvention investigation,” the company said in its earnings presentation Thursday.

The delays are further evidence that the trade issues are disrupting the U.S. solar industry, which relies heavily on panels imported from Asia. Three-quarters of solar companies say deliveries have been affected since the U.S. Commerce Department announced its investigation last month, according to the Solar Energy Industries Association trade group.

“If the Commerce Department were to find circumvention, we believe it would be unwinding a decade of trade practice,” Kirk Crews, NextEra’s chief financial officer, said during a conference call. “We are disappointed with the Commerce decision to conduct this investigation.”

The U.S. depends on Malaysia, Thailand, Vietnam and Cambodia to meet much of its demand for new solar panels, a key resource in the country’s fight against climate change. The Commerce Department is investigating whether Chinese manufacturers are evading tariffs by sending components to other Asian nations for assembly before exporting the finished products.