Nike Inc. soared to an all-time high in the latest sign that consumers are opening their wallets more than expected as the pandemic eases in much of the world.

Shares rose as much as 15 per cent Friday morning to an intraday record US$153.09 after the company projected that revenue this fiscal year will surpass US$50 billion for the first time, benefiting from rebounding growth in North America.

The company is forecasting low double-digit sales growth in the current year, ending next May, executives said Thursday evening after reporting better-than-expected fiscal fourth-quarter results. Growth will be faster in the first half as consumer interest revives. 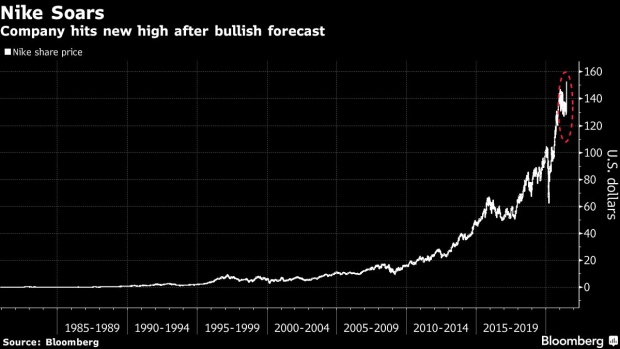 “Nike is one of the best brands on the planet, the global consumer is very strong, the company is furthering its connection with its consumer through tech, and the company’s distribution model is moving away from wholesale,” Jefferies analyst Randal Konik wrote in a research note. “Shares should rise another 50 per cent from here.”

Nike has been gaining momentum as sports leagues and events resume in the U.S. and Europe reopens for business, driving renewed demand for its sneakers and apparel.

Several analysts increased their price targets on the stock after the athleticwear maker posted sales growth across its regions last quarter, boosted by record revenue in North America. Global sales almost doubled to US$12.3 billion in the period ended May 31, the company said in a statement. That beat analysts’ expectations. 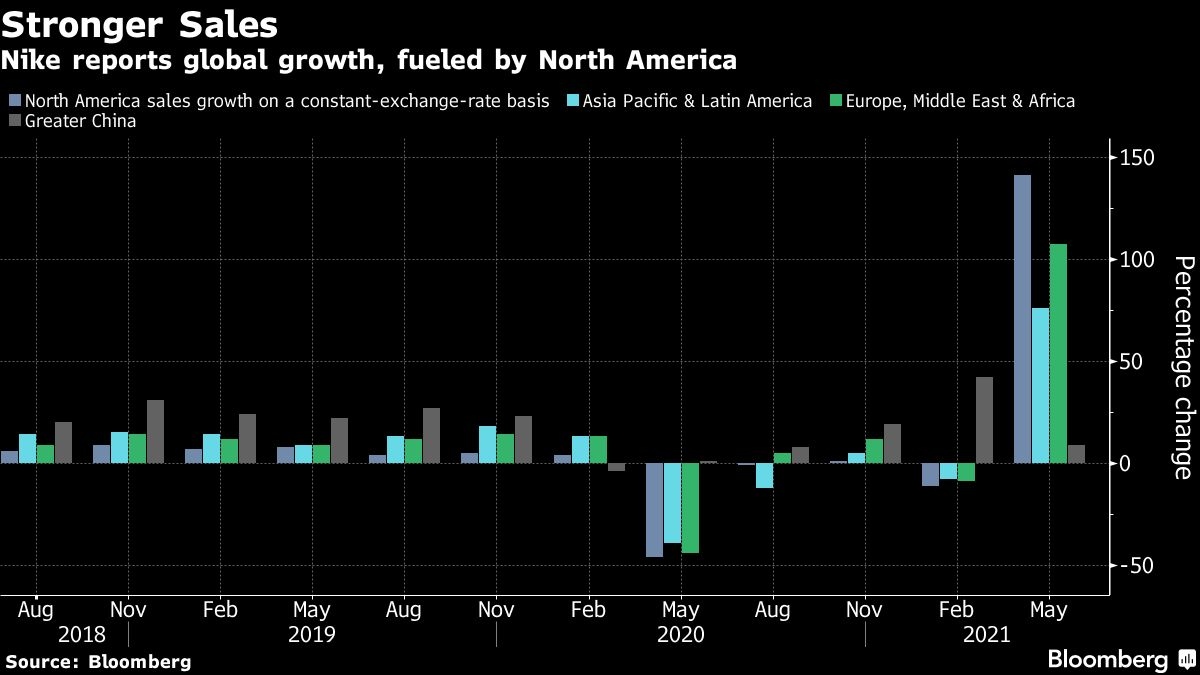 The growth in sales isn’t just a sign the company has moved past pandemic challenges. Chief Executive Officer John Donahoe is also pushing to radically cut down on wholesale distribution by eliminating many of its retail partners in favor of more lucrative direct-to-consumer sales. That’s led to a rise in sales for the Nike Direct division, which spiked 73 per cent in the latest quarter. It has also ushered in improved margins.

“We are building a new financial model that will continue to fuel long-term sustainable, profitable growth,” Matt Friend, Nike’s chief financial officer, said in the statement.

North America had previously been a problematic market for Nike, hindered by supply-chain issues that kept products from reaching consumers. Some of those delayed shipments were bumped into this quarter, aiding wholesale revenue as U.S. states eased virus-related restrictions and many sporting events returned in full.

At the same time, Nike’s sales growth in Greater China, which had until recently led the company’s revival, is starting to cool off. Revenue climbed just 17 per cent -- and less when excluding currency swings -- to US$1.93 billion, missing analysts’ expectations of US$2.25 billion. The results may reflect the impact of boycotts of Nike and other brands over corporate statements on forced labor related to cotton production in the Xinjiang region.

The company forecasts growth in the low to mid teens in China over the long term.

Meanwhile, store closures persisted in Europe, the Middle East and Africa throughout the period. But Nike has been able to reopen almost its entire network, with 99 per cent of stores in the region now fully operational or open with reduced hours.