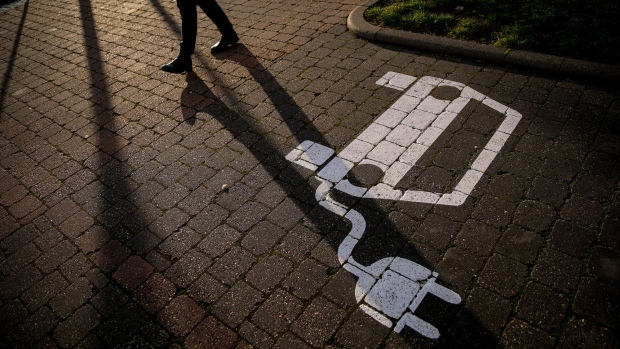 A pedestrian passes an empty electric vehicle charge point space in a parking lot in the market square in Gruenheide, Germany, on Monday, Jan. 13, 2020. Elon Musk is taking his fight for the future of transport into the heartland of the combustion engine, where the established players long laughed off Tesla as an upstart on feeble financial footing that couldn’t compete with their rich engineering heritage. Photographer: Krisztian Bocsi/Bloomberg , Bloomberg

Nikola Corp. shares slumped anew in U.S. pre-market trading, adding to last week’s plunge that was triggered by a short seller who said the electric-truck company was deceiving investors about its technology.

The stock dropped 13 per cent to US$27.85 at 5:48 a.m. New York time. In roller-coaster trading last week, Nikola surged 41 per cent on Tuesday after it announced a partnership with General Motors Co., only to tumble in subsequent days when Hindenburg Research released a report detailing what it called “dozens of lies” about the company’s capabilities, partnerships or products.

Nikola’s shares have tumbled 24 per cent since the Hindenburg report, which, among other sources, cited a Bloomberg story from June about the company exaggerating the capabilities of a truck. Its slump over the last three sessions was 36%. Nikola said the allegations by Hindenburg are false and that it was working on a detailed rebuttal.