The rapid rally in electric vehicle stocks that helped double the market value of some companies within a week, came to a halt on Wednesday.

The buying frenzy in these companies -- many of which began attracting investor interest earlier this year -- accelerated after S&P Dow Jones Indices said on Nov. 16 industry front-runner Tesla Inc. will be added to the benchmark S&P 500 Index in December. Tesla’s stock rose 36 per cent between the announcement and Tuesday’s close, pushing its market valuation over US$500 billion. Shares fell 1.8 per cent Wednesday. 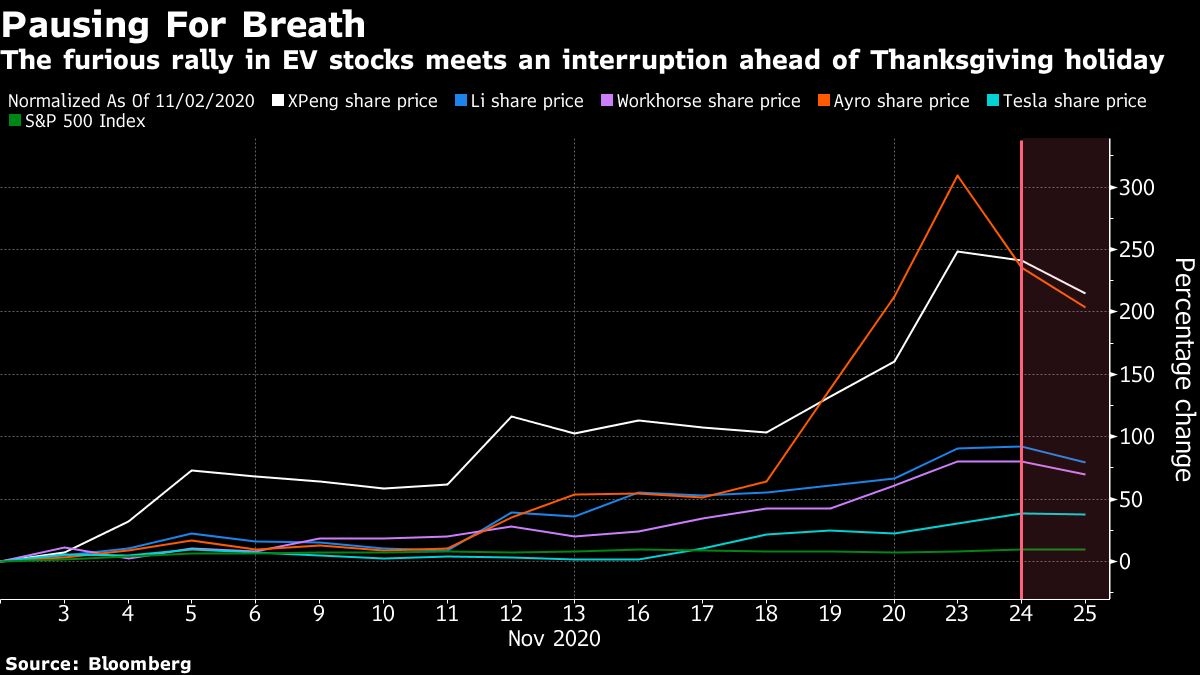 Gravity finally seems to be catching up, with most of the stocks trading lower on Wednesday morning. Shares of Nikola Corp. dropped as much as 17 per cent, the most intraday since September, after its Chief Executive Officer Mark Russell appeared on Jim Cramer’s “Mad Money” show on CNBC Tuesday night. Russell didn’t offer any new details on the company’s ongoing partnership talks with General Motors Co.

JPMorgan analyst Paul Coster said he was skeptical about the company’s Badger pickup truck, given the CEO has been consistently non-committal about the initiative and also since it is not a strategic interest for Nikola. Both GM and Nikola have said the talks are ongoing without offering much detail on the pact, which is a major catalyst for the EV startup’s shares.

Other big declines in the sector came from Workhorse Group Inc., ElectraMeccanica Vehicles Corp., XPeng Inc., Li Auto Inc. and Ayro Inc., all of which fell more than eight per cent.

The big outlier of the day is Fisker Inc., which largely sat out the broader rally before, but gained as much as 25 per cent on Wednesday, after Citi analyst Itay Michaeli initiated coverage on the stock with a buy. The analyst noted that as a prerevenue company, Fisker is a higher-risk investment proposition, but praised its long-term potential. Shares of the company had declined 6.6 per cent since Nov. 16 through Tuesday, while the stocks of the rest of the industry were on fire.