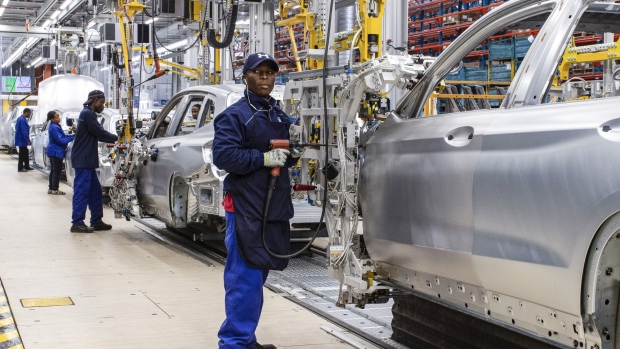 (Bloomberg) -- Nissan Motor Co., BMW AG and Volkswagen AG are among carmakers in talks to bring the electric-car revolution to South Africa, as the nation’s auto-factory floors risk being left behind in the global switch to greener vehicles.

The industry is preparing a unified stance on electrification to present to the government by the end of the year, Mike Mabasa, chief executive officer of the National Association of Automobile Manufacturers of South Africa, or Naamsa, said in an interview.

Among the goals is persuading lawmakers to reduce or drop a 23% import tariff on electric vehicles to help ramp up nascent domestic sales, he said. Another is to roll out a charging infrastructure in a country where the state-owned power monopoly is in deep financial crisis.

Taking steps to boost the popularity of electric vehicles in South Africa is just one part of the equation. The auto-manufacturing industry makes up about 7% of the country’s economy, according to Naamsa. The sector is one of the more positive aspects of an economy expected to grow at less than 1% for a second consecutive year.

“The country needs to move forward and bring new technologies,” said Mike Whitfield, Nissan’s chairman for the southern Africa region. “The rest of the world will move very fast and if we don’t get going we will be left behind.”

South Africa has long been a hub for global automaking, attracting plants operated by seven carmakers from Toyota Motor Corp. to Isuzu Motors Ltd. Last year, the manufacturers exported almost 210,000 cars to Europe, where Volkswagen is already retooling factories to only make electric cars. That’s just under a third of all local production and makes up 60% of exports.

To date, there are no firm plans for electric-car or hybrid production in South Africa, but the government and industry agreed in 2018 to extend a manufacturing incentive program, creating jobs and enabling models like the BMW X3 sport utility vehicle and Nissan’s Novara pickup to be produced locally.

“The electric-vehicle play in South Africa will not be determined by the South African consumer, but by the requirements of export markets,” Martyn Davies, an auto-industry specialist at Deloitte LLP, said by phone from Johannesburg, adding that the weaker rand is also making exports more attractive.

The quality of the local plants of BMW, Ford Motor Co and Mercedes-Benz AG are good enough to make retooling quite straightforward, he said, adding that the next product made in South Africa by those automakers could feasibly be electric.

Under the terms of the new manufacturing plan, the automakers will have to more than double annual production to as many as 1.4 million vehicles by 2035, and that won’t happen without making electric cars as well as gas or diesel, according to Naamsa’s Mabasa.

BMW’s i3 and i8 are two of only three models currently available in the birth country of electric car pioneer Elon Musk, and only 620 units have been sold. Jaguar Land Rover introduced the I-Pace earlier this year, while Nissan is holding off on the launch of the latest Leaf until after an agreement is reached on import tariffs.

Elsewhere on the African continent, a plan by Volkswagen to introduce an electric-vehicle in Rwanda stands in contrast to a lack of other developments.

Another barrier to an accelerated electric-car boom in South Africa is Eskom Holdings SOC Ltd., the power provider that last week reported an annual loss of almost $1.5 billion and requires an $8.8 billion government bailout over the next three years.

The utility has been forced to implement intermittent rolling blackouts and is reliant on coal, which is out of step with the environmentally friendly advantages of producing electric cars, Mabasa said. Therefore, the industry paper is likely to lay out a mixture of power sources between Eskom and privately owned renewable energy projects, he said.

But the need to turn around Eskom’s financial situation is likely to be of more pressing concern to the government than using it to enable the electric-car industry, Nissan’s Whitfield said.

“There is excess capacity, but quite frankly Eskom’s issues have to be addressed or we will have much bigger problems,” Whitfield said.

--With assistance from Prinesha Naidoo.

To contact the reporter on this story: John Bowker in Johannesburg at jbowker2@bloomberg.net

To contact the editors responsible for this story: Anthony Palazzo at apalazzo@bloomberg.net, Elisabeth Behrmann, John Bowker