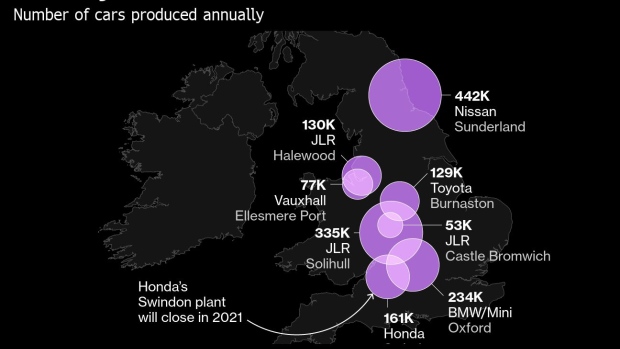 Yet the fanfare Thursday surrounding the updated Juke crossover model may prove to be no more than a stay of execution for a factory whose future will be on the line in the event of a no-deal Brexit.

The launch of the face-lift model will be accompanied by the loss of one of Sunderland’s five daily work shifts as staff transfer between the site’s two assembly lines, a move that may be a precursor of further cuts to come.

Carmakers have been increasingly vocal in opposing a British split from the European Union without a deal, warning of a potentially devastating impact on the industry. Export tariffs would make locally-built autos uncompetitive when sold in mainland Europe and customs checks and red tape would disrupt ultra-efficient just-in-time supply lines, they say.

Nissan, which made Britain its European manufacturing base in 1986, has said it’s “waiting for clarity” on the implications of Brexit. It has already scrapped plans to build its X-Trail sport-utility vehicle at Sunderland, which has a workforce of 6,500 people, and ended production of the luxury Infiniti brand there in July. Production of the larger Qashqai SUV could be moved to Spain.

The latest iteration of the 10-year-old Juke goes on sale without a mention of a hybrid or electric version, in an industry where many new models come to market with options beyond traditional combustion engines.

Jobs at the plant appear safe in the short term, with overall headcount set to remain the same despite the lost shift as manufacturing staff are redeployed to the site’s Line Two to support production of Juke, according to an emailed statement from the company.

But Nissan could find it relatively easy to shift Juke assembly across the Channel if a hard Brexit was to prove too ruinous. The company and partner Renault SA already build multiple models on identical platforms. The Juke’s Common Module Family B platform is architecture being used by Renault to assemble the latest versions of the Clio supermini and Captur crossover.

Priced from 17,395 pounds ($21,274), Nissan will begin delivering the Juke next month, days after the Oct. 31 date for Britain to leave the EU. While Parliament has taken steps to force Boris Johnson to seek an extension to the U.K.’s membership of the block in the absence of a deal, the prime minister has pledged to stick to the deadline.

More than 1 million Jukes have been built in Sunderland since the car was launched in 2010. Almost 80,000 were churned out last year, equivalent to almost a fifth of the plant’s total production of 442,000 autos, with about a third sold in the U.K.

The facility in northeast England helped propel Britain to record auto output and sales in 2016, before concerns about Brexit and a government campaign against diesel motors began to weigh on demand.

Nissan has said friction-less trade has been key to Sunderland’s success and that a sudden change from current arrangements will have “serious implications” for the industry. The site also makes the all-electric Leaf hatchback.

Nissan’s confidence in the U.K. has wavered since Greg Clark, former business secretary, wrote to the company soon after the 2016 Brexit referendum setting out four key assurances, including a pledge to seek tariff-free access to the EU.

Nissan won a 61 million-pound government regional development grant last year to boost productivity in Sunderland, though its aims included securing new production of the now-cancelled X-Trail model. Following the cancellation, Clark told the House of Commons that “Nissan will be invited to resubmit an application in the light of its changed investment.”

The Business Department didn’t have an update on the situation.

--With assistance from Alex Morales and Ania Nussbaum.

To contact the reporter on this story: Siddharth Philip in London at sphilip3@bloomberg.net

To contact the editors responsible for this story: Tara Patel at tpatel2@bloomberg.net, Christopher Jasper