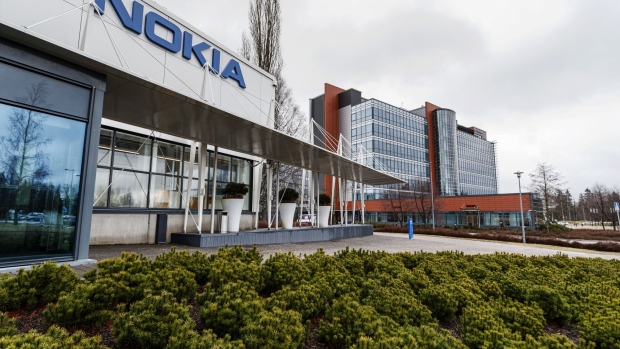 The Nokia Oyj Executive Experience Center stands in Espoo, Finland, on Monday, March 2, 2020. Pekka Lundmark, the CEO of Fortum Oyj, will take over from Rajeev Suri at the start of September. , Bloomberg

Nokia Oyj will cut as many as 10,000 jobs in the coming years so it can invest more to catch up in the race to win orders for 5G networks.

The measures will trim 600 million euros (US$715 million) off Nokia’s cost base by the end of 2023, the Finnish telecommunications equipment maker said in a statement on Tuesday. The move doesn’t affect the outlook for 2021, it said.

The decision to part ways with as much as 10 per cent of its workforce follows an annual report that left investors disappointed by the prospect of a continued slide in revenue. Nokia said the restructuring plan could cost as much as 700 million euros over the coming two years.

“It’s a massive program” that reflects “the pace of change in the industry,” analyst Kimmo Stenvall at OP Group said by phone. “The shareholder will be left with nothing, all the proceeds will go toward R&D and developing the company.”

The move is part of a strategy unveiled in October to create a new operating model that Nokia hopes will help it cope better with the competitive markets it faces. That’s as Stockholm-based rival Ericsson AB has managed to build 5G networks faster than expected, reaching profitability targets ahead of schedule.

With the latest changes at Nokia, Chief Executive Officer Pekka Lundmark said that each of the company’s four business groups “has identified a clear path to sustainable, profitable growth and they are resetting their cost bases to invest in their future.”

Nokia, once the dominant maker of mobile phones and Europe’s most valuable company, is a shadow of its former self after Apple Inc.’s iPhone and Samsung Electronics Co. pushed it out of the handset business a decade ago.

More recently, it lost some market share in the opening salvos of the 5G race and has struggled to integrate its giant Alcatel-Lucent purchase from 2016. That’s left it trailing Ericsson and Huawei Technologies Co., and watching Samsung, a relatively new entrant in networks, take market share.

Governments and telecommunications companies are also pushing for more supply competition and diversity to avoid becoming overly reliant on just one or two vendors again.

Still, Nokia helped fill the void when the use of Huawei in 5G networks was banned or curbed in important markets including the U.K., winning major contracts with customers including BT Group Plc.

Nokia’s main units will redeploy savings into research and development. The biggest changes will impact its mobile networks, which is undergoing a turnaround to catch up with rivals in 5G gear. A revamp is also seen at the cloud and network services unit, where it needs to adjust to customers shifting away from owning products, while network infrastructure and the unit overseeing Nokia’s patent portfolio will remain largely unchanged, the company said.

France will be excluded from the changes due to previous restructuring plans, a spokesperson at Nokia said in an emailed response to questions. In Finland, where the company is headquartered, the impact of job changes will be “net positive” as recruitment focused on 5G will continue. The company said it’s too early to elaborate further on where cuts will be made geographically.

More details on the plan will be unveiled at Nokia’s capital markets day on March 18.

In giving no indication of the net savings, “it seems Nokia wants to be extra careful at this point and doesn’t want to promise too much,” Stenvall said. He recommends clients accumulate the stock.