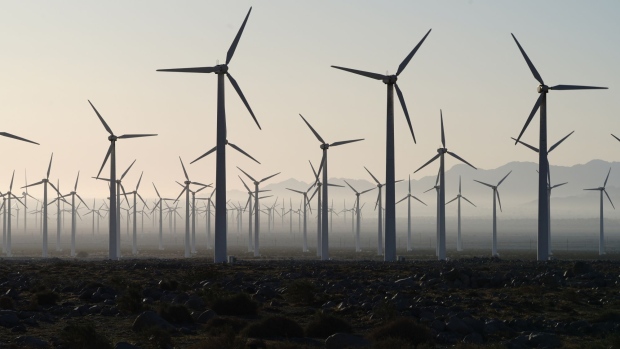 Wind turbines at the San Gorgonio Pass wind farm, owned by NextEra Energy Inc., in Whitewater, California, U.S., on Wednesday, Feb. 17, 2021. Riverside County set up a three-day mobile vaccination clinic at Sea View Packing, where Medjool dates and other fruits are packed, as part of an effort to innoculate local agricultural workers. , Bloomberg

To “protect the interests of all shareholders and to ensure the continued efficient management of the fund,” Nordea plans to cap daily subscriptions and conversions at 1 million euros, effective June 25, it said on Thursday. The cap is per shareholder and applies to institutional share classes only. Nordea said it will take more measures to slow inflows if necessary.

The bank’s Global Climate and Environment Fund has swelled more than 30% since the end of January, and now holds about 8.4 billion euros ($10.2 billion) in assets, according to data compiled by Bloomberg. Nordea announced already back in February that it felt compelled to impose a soft close, whereby it no longer accepted subscriptions from new investors.

Asset managers and pension funds everywhere are stepping up their hunt for environmental, social and governance assets amid a growing awareness that ESG risk equals financial risk. Meanwhile, governments and regulators are imposing ever stricter rules as it becomes increasingly clear that the planet is overheating at a dangerous pace.

New European requirements mean investment advisers must now disclose the sustainability profile of the products they design; that includes how aligned they are with the Paris Agreement to cap global temperature increases at close to 1.5 degrees Celsius by the end of the century. Banks also face a so-called green asset ratio to show how much of the financing they provide is aligned.

Global ESG-focused exchange-traded funds saw $60.9 billion in net new inflows since the start of the year and $112.5 billion over the last year, data compiled by Bloomberg shows.

U.K. Rules on Green Investing Aim to Be More Strict Than EU

Nordea said the flow development in its fund will now “be continuously monitored.” The “additional restrictions” it’s imposing on institutional share classes “shall be reassessed should they be insufficient to maintain flows in the fund at an acceptable level.”

Created in 2008, the Nordea fund is open-ended and buys equity or equity-related instruments of companies that stand to gain from developments related to environmental challenges.