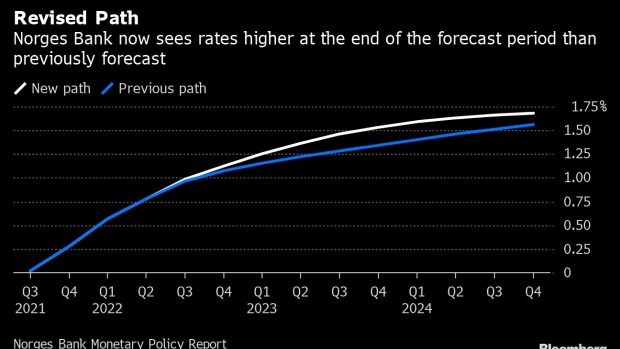 Commuters wait for a tram at the "Jernbanetorget" stop in Oslo, Norway, on Wednesday, Sept. 23, 2020. Norway's central bank ruled out an increase in interest rates for the coming years, citing a highly uncertain economic environment due to the ongoing pandemic. Photographer: Odin Jaeger/Bloomberg , Bloomberg

Norway delivered the first post-crisis interest-rate increase among economies with the world’s 10 most-traded currencies, and officials signaled an accelerated cycle of hiking to come in response to a robust rebound from the pandemic.

Norges Bank raised its main rate by 25 basis points from zero, as forecast by 14 out of 15 economists surveyed by Bloomberg. Officials said that their guidance was for a “slightly” higher path for the benchmark than signaled in June.

“A normalizing economy now suggests that it is appropriate to begin a gradual normalization of the policy rate,” central bank Governor Governor Oystein Olsen said in a statement on Thursday in Oslo. “Based on the Committee’s current assessment of the outlook and balance of risks, the policy rate will most likely be raised further in December.”

The move is a highlight in a pivotal week for global monetary policy, with at least 15 central bank decisions responding to different stages of recovery and associated pickups in inflation. On the eve of Norway’s action, Brazilian officials raised their interest rate by a whole percentage point while the Federal Reserve said it may soon start to taper bond purchases.

The Norges decision reflects a faster-than-expected bounceback in the richest Nordic economy on a per-capita basis, as well as the greater monetary flexibility available to it because of the fiscal support delivered by the country’s $1.4 trillion wealth fund created from the proceeds of decades of oil production.

The central bank has managed to weather the crisis as the only one in the region to have avoided resorted to sub-zero interest rates or quantitative easing. Olsen, who said last month he will step down in February after an 11-year term, has repeatedly made clear he’s keen to avoid such policies.

Norway’s position contrasts with regional peers that have adopted much more dovish stances to foster recoveries from pandemic-related shutdowns.

In the euro-zone, while the European Central Bank is dialing back stimulus, officials insist that isn’t a taper. Meanwhile the Riksbank in neighboring Sweden this week refrained from any tightening steps through the third quarter of 2024, and Swiss officials on Thursday kept their own rate at -0.75%, the world’s lowest.

While regional peers have voiced concerns of supply bottlenecks triggering faster inflation, Norges Bank policy makers have largely brushed off concerns about a recent jump there, as underlying consumer-price growth has declined to the slowest level since 2017. They said on Thursday that the risk of too-high inflation is “limited.”