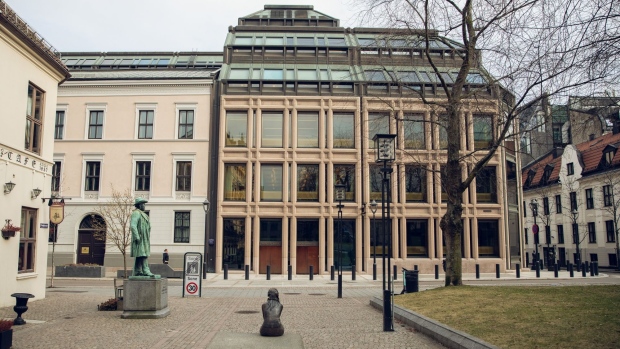 The Norges Bank, Norway's central bank, stands in Oslo, Norway, on Wednesday, March 25, 2020. Norway will extend drastic measures imposed to limit the spread of coronavirus for three weeks, as the number of confirmed cases continues to rise and the richest Nordic economy keeps slowing down. Photographer: Odin Jaeger/Bloomberg , Bloomberg

(Bloomberg) -- Norway’s central bank raised its key interest rate by a half point and signaled that its tightening may be nearing an end as officials see the economy responding to their action against inflation.

The increase in the benchmark to 2.25% was predicted by all economists in a Bloomberg survey. The policy rate is now at the highest since 2011, and Norges Bank said it will probably be raised again in November. That decision will now feature a press conference, which isn’t usual for that month.

“Monetary policy is starting to have a tightening effect on the Norwegian economy,” officials led by Ida Wolden Bache said in a statement. “This may suggest a more gradual approach to policy rate setting ahead.”

The central bank projected likely further increases to reach 3% in coming months and then to stay close to that level, with a projected peak of 3.11% in the third quarter of next year. That would be lower than market pricing of 3.5% indicated before the decision.

Like its global peers, Norges Bank has been wrong-footed by inflation that is near a 34-year high. Its policy makers were among the first in the rich world to start raising rates last September, and they were previously forced to accelerate tightening when 25 basis-point steps proved too small.

The new rate projection “is on the dovish side to what markets expected beforehand,” Nordea strategist Dane Cekov said in a report. He expects that Norges Bank will take the policy rate to 3.25% by next summer, and said that if inflation continues to exceed its forecasts, “the central bank may have to raise interest rates even higher.”

The Norwegian currency weakened immediately after the announcement before recovering to trade at 10.178 kroner against the euro.

Danske Bank’s head of FX research, Kristoffer Kjaer Lomholt, said markets were positioned for 125 basis points of more tightening until June next year, while Norges Bank indicates only 85 basis points and with less front-loading than invetors have priced in.

Speculation of a faster increase intensified before the decision after neighboring Sweden’s central bank delivered a surprisingly large full-point increase in borrowing costs on Tuesday. Since then, both the US Federal Reserve and the Swiss National Bank matched expectations with 75 basis-point hikes.

Norway’s oil-rich economy weathered the pandemic better than most, and has since been more insulated than regional peers from Europe’s energy crisis and the end of natural gas shipments by Russia because of correspondingly higher demand for its fossil-fuel exports.

While the country’s labor market has also remained robust, first signs of cooling have emerged. A slump in consumption drove a surprise contraction in mainland economic output in July.

The country’s high household debt -- equivalent to 241% of net disposable income in 2021, and second only to Denmark -- is another factor that will have weighed on officials minds when contemplating a steeper rate hike, and may continue to do so.

The central bank now expects the economy to contract by 0.3% next year and then to grow again by 0.4% in 2024. House prices are now expected to fall 2.4% next year, versus the previous forecast of a 1% drop.