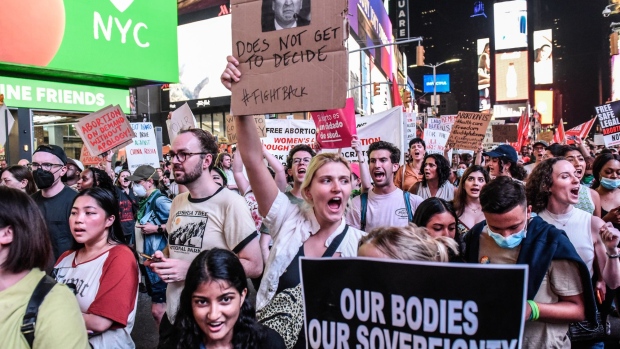 Abortion rights demonstrators hold signs while walking through the streets during a protest in New York, US, on Friday, June 24, 2022. A deeply divided US Supreme Court overturned the 1973 Roe v. Wade decision and wiped out the constitutional right to abortion, issuing a historic ruling likely to render the procedure largely illegal in half the country. , Bloomberg

(Bloomberg) -- New York Governor Kathy Hochul said she will convene an extraordinary session of the legislature on Friday to begin considering legislation enshrining abortion access in the state’s constitution.

The State will take action to protect its people in response to Supreme Court rulings on abortion rights and gun safety, according to the statement. “Recent Supreme Court rulings have threatened the rights of New Yorkers to make decisions about their own bodies and our right to protect New Yorkers from gun violence, but we refuse to stand idly by, and we must act,” Hochul said.

Hochul won the state’s Democratic primary for governor on Tuesday and will face Republican Lee Zeldin in November’s general election.