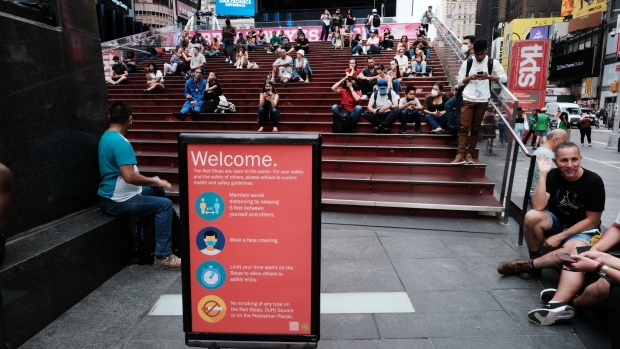 NEW YORK, NEW YORK - SEPTEMBER 14: People spend an evening in Times Square as Broadway shows reopen on September 14, 2021 in New York City. Major Broadway shows including The Lion King, Hamilton, Wicked and Chicago will return to live performances tonight for the first time in 18 months after closing due to the COVID-19 pandemic. Proof of vaccination and masks will be required for all audience members. Broadway shows draw thousands of tourists a year and support restaurants, bars and retail businesses throughout the city. (Photo by Spencer Platt/Getty Images) , Photographer: Spencer Platt/Getty Images North America

(Bloomberg) -- Off-Broadway theaters and comedy clubs in New York City say they’re being unfairly singled out by a city policy that requires them to verify that their patrons are vaccinated against Covid-19 before letting them in.

De Blasio announced the rule in August. It requires patrons and employees to show proof that they have had at least one vaccine dose. The order applies to indoor restaurants, gyms, concert halls and theaters, including movie theaters -- but not places of worship.

During the pandemic, lawmakers have had to tiptoe around pandemic rules aimed at churches, which have argued successfully in court that the Constitution’s First Amendment prohibits any law that infringes on the free exercise of religion.

The city didn’t immediately respond to an emailed request for comment, sent after regular business hours.

In their suit, the theater and comedy club owners say that the vaccine mandate is the latest in a long series of hardships they have faced since they were shut down at the start of the pandemic.

“For small venue theaters and comedy clubs like plaintiffs, enforcing this unequal mandate is burdensome and further stigmatizes businesses that are already struggling to bounce back from being shut down for a year,” the owners say.