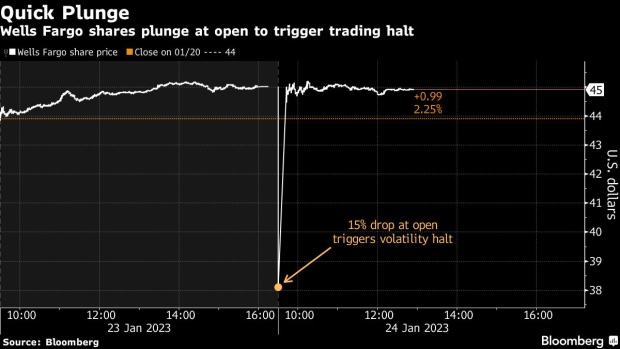 The root cause of the issue, which the exchange operator said has been resolved, was tied to the company’s “disaster recovery configuration” at the start of the day. More than 1,300 trades and some 84 stocks were impacted and marked as “aberrant,” NYSE said in an updated statement on its website.

Banks, retailers and industrial companies were among those affected in yesterday’s technical issue, including Wells Fargo & Co., McDonald’s Corp., Walmart Inc. and Morgan Stanley. The error resulted in some gyrations that spanned almost 25 percentage points between the high and low prices in a matter of minutes.

NYSE said that some 4,341 trades in 251 ticker symbols “should be busted.” Most of the trade breaks were processed Tuesday, with the exchange planning to process the rest today.

“All exchange systems are operational, and a normal opening for Jan. 25, 2023, is expected,” NYSE said.

The amount of stock traded Tuesday at away-from-market prices was just a tiny fraction of the usual volume in stocks that normally see millions of shares change hands each day. In companies like McDonald’s and Verizon Communications Inc., a few thousand shares went off at prices well above or below the last trade. Others like Nike Inc. and Exxon Mobil Corp. saw millions of dollars of stock move, data compiled by Bloomberg show.

The freakish action bore hallmarks of past episodes in which computer malfunctions led to sudden price distortions. A US Securities and Exchange Commission spokesperson said the agency is looking into the matter.

On Tuesday, Walmart and McDonald’s were up and then down as much as 12% before reverting to more normal trading ranges. By late in the session, the broad stock indexes were little changed. Transactions occurred in NYSE-listed securities and took place on other platforms, including ones overseen by Nasdaq Inc., CBOE Global Markets and private venues reporting to the Finra trade-reporting facility.

The start of trading in most American stocks involves a complicated but usually routine process called the opening auction, designed to limit volatility resulting from orders for shares that pile up before the start of the regular session. In it, a computer balances out supply and demand for a particular stock by establishing an opening price that can be viewed as the level that satisfies the largest possible number of traders.