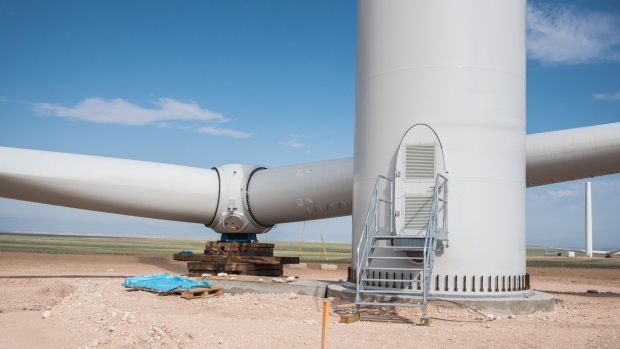 A wind turbine under construction at the Avangrid Renewables La Joya wind farm in Encino, New Mexico, U.S., on Wednesday, Aug. 5, 2020. The complex will eventually be equipped with 111 turbines and is scheduled to become fully operational by the end of this year. Photographer: Cate Dingley/Bloomberg , Bloomberg

Norwegian billionaire Kjell Inge Rokke, who built most of his fortune on oil and gas, says the time has come to start investing more heavily in renewable energy.

The 61-year-old suggested that a tipping point had now been reached in the energy industry, while underscoring his conviction that the world will continue to need fossil fuels for years to come.

“A good hunter is a patient hunter,” Rokke said during a webcast panel discussion. He also said that investors who started “too early” have “burned through cash.”

Rokke’s investment company Aker ASA took steps earlier this year to spin off clean-energy units, joining a whirlwind of change that’s sweeping the global oil industry. The new companies have since surged in line with other renewable stocks as investors flock around sustainable assets.

In a rare public appearance at Pareto Securities AS’s Energy Conference on Wednesday, Rokke said he had discussed the timing with Aker Chief Executive Oyvind Eriksen for years.

“The key thing for us is to listen, when you are wrong, admit it, and change direction,” Rokke said. “That’s something that has served us well in this extraordinary shift in the energy sector.”

Aker’s 40% stake in oil producer Aker BP ASA, where BP Plc owns 30%, still makes up more than half of the holding company’s value. Rokke dismissed “doomsday sayers” and said Norway shouldn’t stop producing oil and gas. But he also predicted that other businesses will rapidly rise to make up most of his empire.

In as little as five years, Aker’s exposure to digital solutions and IT, primarily through its majority stake in Cognite AS, could make up between half and two-thirds of the company’s value, Rokke predicted. “Quote me on that five years from now,” he said.

“What we’re doing in the green space is also exciting,” he said. “Less than 10% of offshore wind has been installed so far. We are in the infancy.”

Aker is also working on establishing a separate unit dedicated to hydrogen, Eriksen said in a presentation before Rokke spoke.