The fear of peak demand is leading to reality of peak supply: Eric Nuttall

Futures in New York fell 0.2 per cent on Monday after rallying the previous four sessions. Global cases of COVID-19 have increased the most in two months with infections surging in the U.S., Brazil, India, Indonesia and the U.K. Countries with lower vaccination coverage in parts of Asia are seeing more fatalities and renewed restrictions, posing a threat to fuel consumption and demand for oil. On Monday, the U.S. raised a COVID-19 travel warning for Spain to the highest level.

“We’ve seen demand, excluding jet fuel, come back in the developed world in a really strong way,” said Peter McNally, global head of industrials, materials and energy at Third Bridge. “So that’s a known. The impact on the the developing world’s been more unknown.” 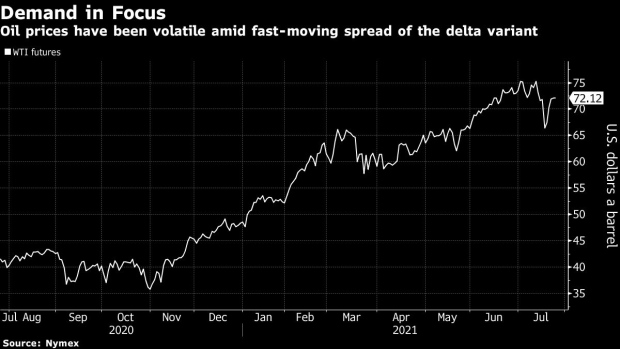 The resurgence of coronavirus cases has created volatility in the oil market and interrupted a steady price rally this year. Money managers cut their net-long positions in the U.S. crude benchmark by the most since 2017 last week as the delta variant shook broader markets.

“There is seemingly a battle within the energy complex between the prevailing supply deficit engineered by OPEC+ and the threat of the COVID-19 Delta variant in regions with low-vaccination rates,” said Kevin Solomon, an analyst at brokerage StoneX Group.

Investors are also awaiting earnings reports from major oil companies such as Exxon Mobil Corp. this week. Last week, U.S. shale producers suggested slowing production growth in the latter half of the year and continued discipline.

“There’s been a lot of talk, and a lot of action on capital discipline, there’s no doubt on that,” said McNally. “But it’s hard to pinpoint the exact week, day, that we do see this turn in supply and it’s something we’re certainly going to watch a bit more closely.”