Oil explorers are drilling at the slowest pace in more than a decade as the pandemic-driven collapse in energy demand wipes out cash flow, jobs and even entire companies.

Drillers idled 15 oil rigs across the U.S. this week, bringing the tally to 222, the lowest since 2009, according to Baker Hughes Co. data released on Friday. The Permin Basin of West Texas and New Mexico accounted for the bulk of the reduction, with 14 machines turned off.

The nationwide count has tumbled 67 per cent since early March as COVID-19 lockdowns paralyzed economies and crushed crude markets.

Oil companies have abandoned drilling programs and tossed out financial forecasts in the wake of the crippling spiral that saw American crude prices turn negative in recent weeks. Bankruptcies are accelerating among the most heavily leveraged drillers, and even industry titans such as Chevron Corp. are slashing jobs and adopting austerity plans to conserve capital.

Explorers are “taking it on the chin right now, and certainly production is slowing down and activity is slowing down,” Precision Drilling Corp. Chief Executive Officer Kevin Neveu said in an interview earlier in the week.

In the Permian region -- which for years was the primary driver of explosive U.S. oil-production growth -- drilling fell this week to the lowest since mid 2016, the data showed. Activity also slipped in the Bakken region of North Dakota. 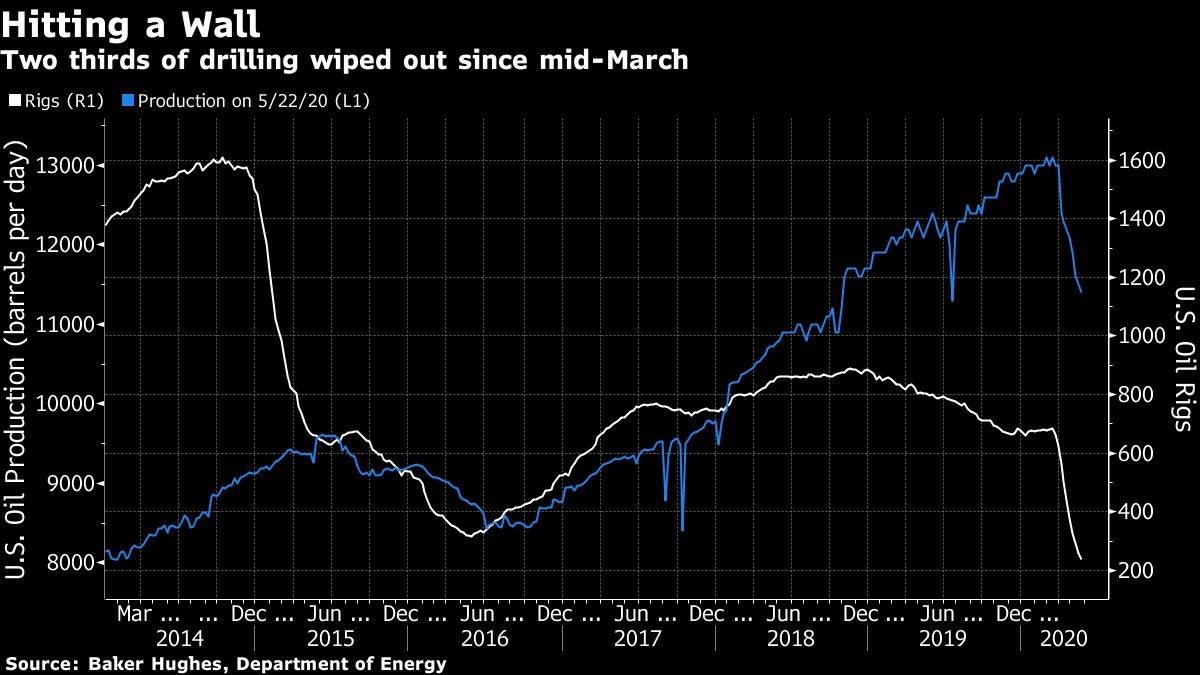 The rig count is a closely watched metric because it’s long been considered indicative of future crude production. The relationship is imperfect, however, because of the time lag between drilling a well and commencing production, as well as other factors such as the turning off of existing wells in response to price movements.

Benchmark U.S. oil futures have advanced more than 70 per cent this month to about US$33 a barrel. In late April, they collapsed to minus US$40.32, triggering widespread panic among explorers and the companies they rely on to frack wells and supply pipes.

U.S. oil production has fallen 12 per cent since early March to 11.4 million barrels a day, according to the Energy Information Administration. That’s the lowest since July, when American crude futures were above $55.