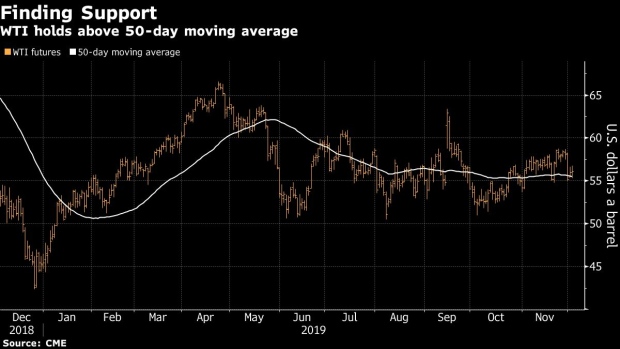 (Bloomberg) -- Oil rose for a third day before this week’s OPEC+ meeting that could lead to deeper supply cuts by some of the world’s biggest crude producers, and after a report that showed U.S. supplies likely tightened in the past week.

Futures in New York were up 0.5%, after gaining 0.3% on Tuesday. Iraq’s Oil Minister Thamir Ghadhban reiterated his view that OPEC+ should deepen output cuts by about 400,000 barrels a day, but said there’s no final agreement in the group on such a proposal.

Meanwhile, the American Petroleum Institute reported U.S. crude stockpiles fell by 3.72 million barrels last week, according to people familiar with the data. That would be the biggest decline since early September if U.S. government data confirms it later in the week.