Energy is a reasonable trade for now, but its drop could be 'quite significant' by 2023: Strategist

Oil settled at the highest in nearly three weeks after a volatile session that saw the market eventually pivot back to supply concerns stemming from a European Union’s proposal to sanction Russian oil.

West Texas Intermediate closed above US$108 a barrel on Thursday for the first time since late-March. Earlier, the benchmark had lost as much as 1.3 PER CENT after gains in the dollar and deep losses in equities markets raised concerns over an economic recession resurfacing. The dollar was higher Thursday after the Fed hiked interest rates by the most since 2000. But the market reverted its attention back to prospects for tighten fundamentals in the short-term.

“With so many contributing factors in play its hardly surprising that volatility has been injected back into the oil price,” said Fiona Cincotta, senior market analyst at City Index. “That said, the market hasn’t fully priced in the EU ban on Russian oil, with a final vote still pending, so losses in the oil market could be limited below here.”

The U.S. government announced a plan Thursday to begin a buyback of oil for the nation’s reserve as early as in this fall. But the deliveries would only take place in future years. Still, the plan did come as a surprise to the market and was seen as counter-productive given the government’s desire for cheaper energy prices. 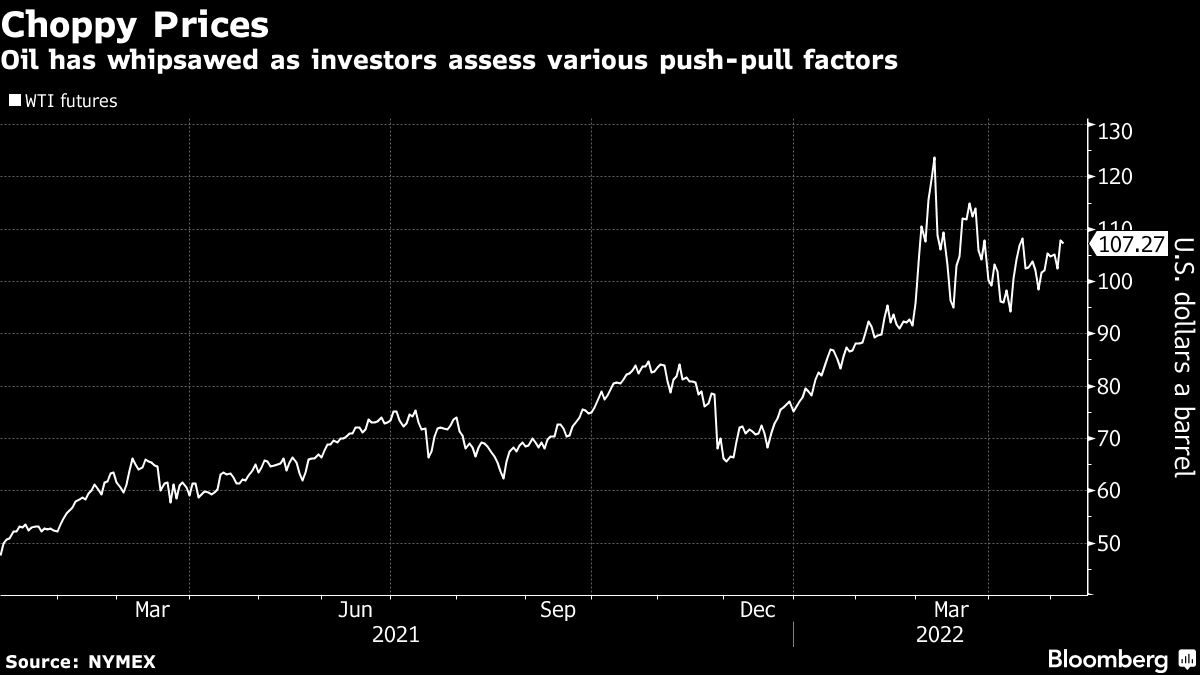 The EU said this week it will ban Russian crude over the next six months and refined fuels by year’s end to increase pressure on President Vladimir Putin over his invasion of Ukraine. The bloc also is targeting insurers in a move that could dramatically impair Moscow’s ability to ship oil around the world.

At present, Russia’s oil exports are running at a record pace as Moscow manages to reroute cargoes previously sent to the U.S. and elsewhere to alternative buyers, especially in Asia, according to the note.

The EU aims to conclude the sanctions package by the end of the week, or May 9 at the latest, according to diplomats. To get the curbs over the line, the bloc needs to address concerns from Hungary and Slovakia on phaseout timing, and queries from Greece on banning transport of oil between third countries.

Oil has surged more than 40 per cent this year as the war disrupted flows, inflation picked up and central banks -- including the U.S. Federal Reserve -- started tightening policy.

Oil benchmarks remain in backwardation, a bullish pattern marked by near-term prices trading above longer-dated ones. Among key differentials, the spread between Brent’s two nearest December contracts was near US$13 a barrel Thursday. That’s more than triple the gap at the start of the year.

Meanwhile, OPEC and its allies will nominally increase production by 432,000 barrels a day in June. However, OPEC only managed an increase of just 10,000 barrels a day in April, indicating the difficulty the group is having in lifting output in line with its plan. Also, IEA’s Executive Director Fatih Birol said the agency’s members were in a position to release more oil stockpiles if needed. ​