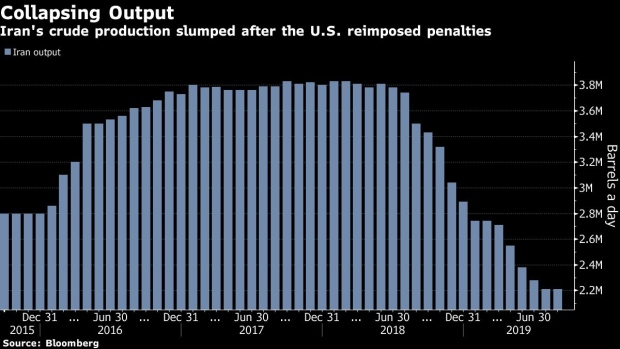 (Bloomberg) -- Donald Trump is stirring up the oil market again as a move to delay the next tariff increase on China pushed prices higher hours after they collapsed on signs he’s prepared to ease sanctions against top producer Iran.

Futures added as much as 0.9% in New York after falling 2.9% on Wednesday, the biggest drop in four weeks. Trump said he was postponing the imposition of extra tariffs on Chinese goods by two weeks, offering a glimmer of hope for global demand. The U.S. President discussed moderating penalties on Iran at the Oval Office on Monday to help secure a meeting with his counterpart Hassan Rouhani later this month, according to three people familiar with the matter.

Oil is down about 15% from its peak in April as the prolonged U.S.-China trade spat dents the outlook for global demand. An easing of the standoff with Iran could bring back around 700,000 barrels a day of crude from the OPEC producer, possibly by the first quarter, RBC Capital Markets said this week after the ouster of hawkish U.S. National Security Adviser John Bolton.

To contact the reporter on this story: Tsuyoshi Inajima in Tokyo at tinajima@bloomberg.net