Demand for oil will decrease; however, Russia could continue to weaponize it: Strategist

Oil posted the biggest weekly decline since early April on growing signs that a global economic slowdown is curbing demand. Prices are near the lowest level in six months.

West Texas Intermediate settled at US$89 a barrel, ending the week nearly 10 per cent lower. US gasoline consumption has dropped, stoking demand concerns, while low liquidity has added to volatility. Supplies from Libya also picked up, helping to shrink key oil futures time-spreads and ease the tightness in the market.

The pullback is evident across the oil market. Gasoline futures are down 18 per cent this week. Meanwhile, physical oil differentials have narrowed and Brent’s prompt spread -- the difference between its two nearest contracts and a gauge of supply -- shrunk to US$1.73 a barrel in backwardation, down from more than US$6 a week ago.

“Crude broke several technical levels in a week that has been a bloodbath for super-cycle believers,” said Rebecca Babin, a senior energy trader at CIBC Private Wealth Management. “The action, however, indicates that this was more of a buyers’ strike than meaningful position reduction, as buyers are content to sit on the sidelines until the broader narrative around demand improves.” 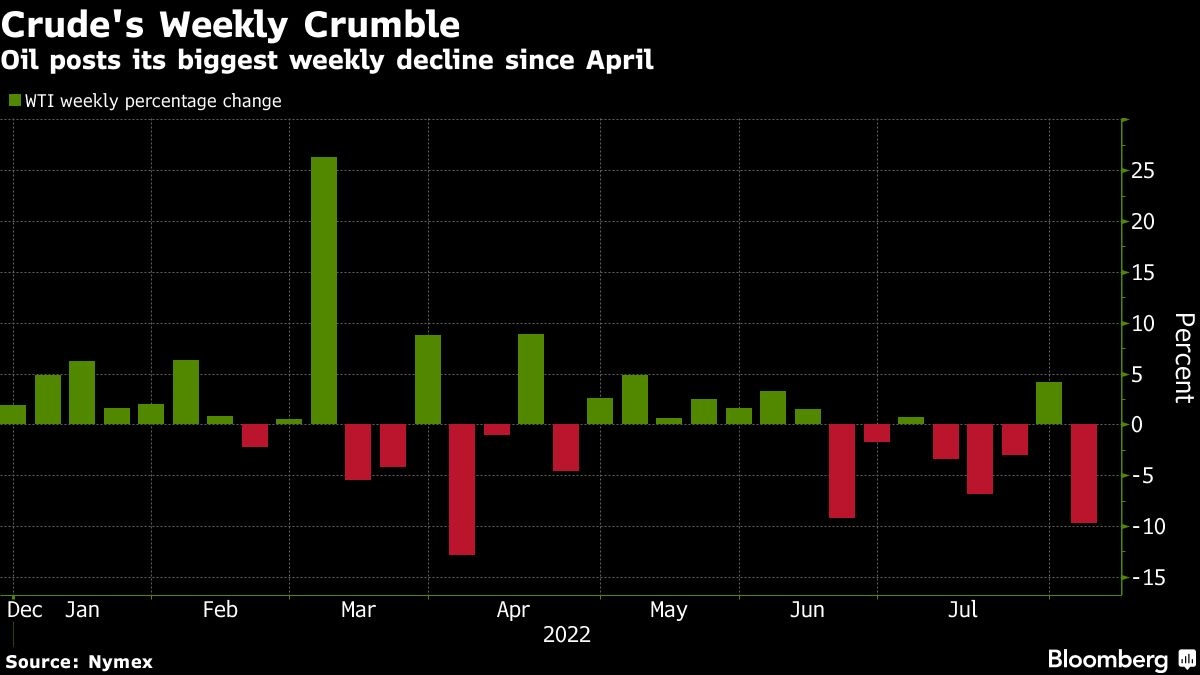 After surging in the first five months of the year, crude’s rally has been thrown into reverse, with losses deepening this month after declines in June and July. The selloff, which has been exacerbated by below-average trading volumes, may alleviate some of the inflationary pressures coursing through the global economy that have spurred central banks including the US Federal Reserve to hike rates.

The shift to tighter monetary policy has stoked concern among investors that growth will slow, imperiling the outlook for energy usage. The Bank of England warned that the UK is heading for more than a year of recession as it raised borrowing costs, while in the US, a procession of Federal Reserve speakers pledged to continue an aggressive fight to cool inflation.

Still, there were some signs of bullishness with Saudi Arabia this week boosting its prices, and OPEC+ warning of scant spare capacity. Saudi Aramco increased its Arab Light grade for next month’s shipments to Asian refineries to a record US$9.80 a barrel above the Middle Eastern benchmark. Traders and refiners had expected an even bigger jump.