We see opportunities in the leisure sectors: CEO and portfolio manager

US stocks notched a weekly gain after a surprisingly strong jobs report alleviated recession fears but cleared the path for the Federal Reserve to raise rates sharply at its next meeting.

The S&P 500 suffered a decline on Friday after falling as much as 1.1 per cent during the session. But the index and the Nasdaq 100 wrapped up their third straight week of gains, the longest winning streak since April.

Treasuries sank, with the 10-year yield around 2.83 per cent, after climbing nearly nearly 26 basis points since Monday.

The strong jobs report on Friday validated the Fed’s view of a resilient economy that can withstand additional interest-rate hikes. Traders have now recalibrated expectations for Fed policy, with a hike of three-quarters of a percentage point the more likely scenario at the September meeting as the central bank battles inflation.

A handful of Fed officials this week reiterated the central bank’s resolve to bring down high prices. Among them is Fed St Louis President James Bullard, who has said he favors a strategy of front-loading big interest-rate hikes. That stance has likely strengthened after Friday’s job report, ruling out the possibility of a dovish pivot that Fed Chair Jerome Powell hinted at last week.

“This jobs report is consistent with an inflationary boom,” said Neil Dutta, head of economics at Renaissance Macro Research. “The Fed has a lot more work to do and in an odd way, that the Fed needs to get more aggressive in pushing up rates, makes the hard-landing scenario more likely.” 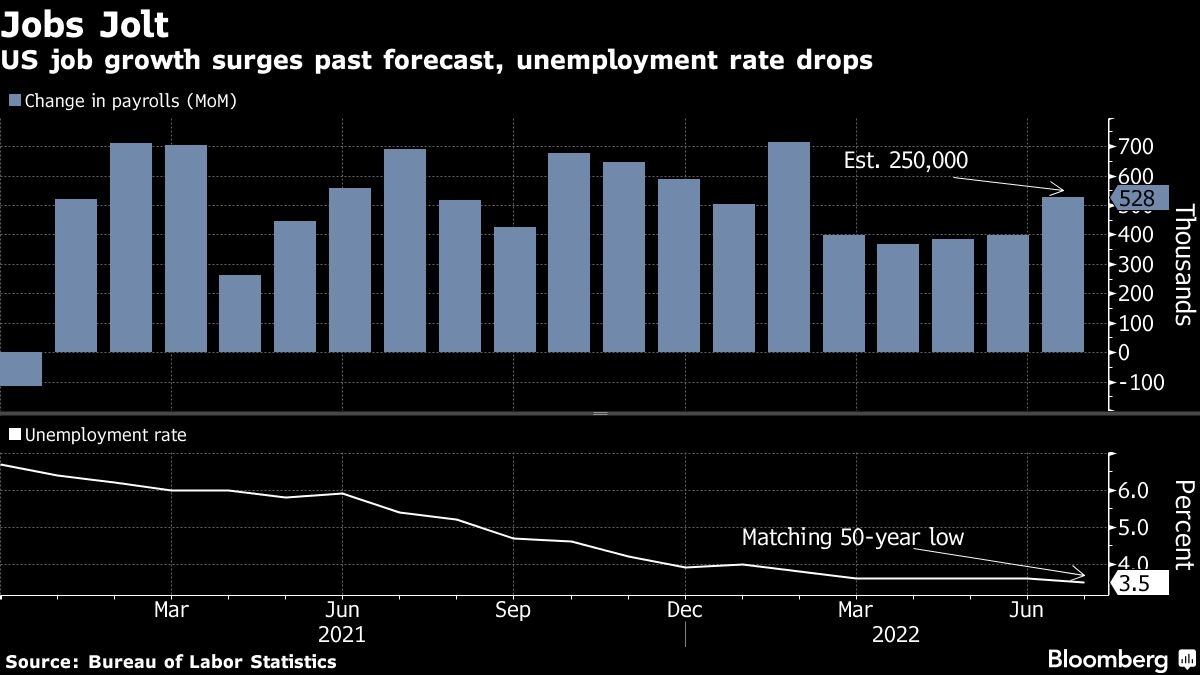 Here’s what else Wall Street is saying about the jobs surprise:

Corporate earnings, combined with thin liquidity that’s common in the summer, took the stock market on a ride this week. Many firms beat expectations and proved they could handle high inflation and a gloomy economic outlook. But investors have resumed shunning global stocks in favor of bonds, according to Bank of America Corp. strategists, who say it’s time to step back from US equities after July’s rally.

US-China tension also remained among the uncertainties clouding the outlook. China announced it would halt cooperation with the US in a number of areas -- including working-level talks on climate change and defense -- after US House Speaker Nancy Pelosi’s trip to Taiwan this week. China also sent warships across the Taiwan Strait’s median line, a day after likely firing missiles over the island.

West Texas Intermediate rose to near US$90 a barrel, but remains on track for its biggest weekly decline since April. Gold fell and Bitcoin gained.