Oil market has clearly priced in a recession: Randy Ollenberger

West Texas Intermediate crude futures settled below US$100 on Tuesday after falling more than 8 per cent, the most since March 9. Risk-off sentiment spread throughout markets on escalating concerns that a global economic slowdown will ultimately hobble demand. Oil prices have been prone to violent swings as traders fled to the exits after Russia invaded Ukraine, drying up liquidity. The latest plunge came as equities slid and the dollar surged. Citigroup Inc. said that crude could fall to US$65 this year in the event of a recession.

Oil prices have been under pressure in the past month as central banks aggressively raise interest rates. Still, physical barrels are fetching enormous premiums. Saudi Arabia hiked its official selling prices to Asia on Tuesday. Its flagship Arab Light crude price will be US$9.30 above its regional benchmark in August, an increase of US$2.80.

“Crude oil prices have slumped as weakening demand concerns are starting to outweigh fears about tight supply,” said Fawad Razaqzada, market analyst at City Index. “A growing number of analysts are expecting that many of the world’s leading economies will suffer negative growth in the next few months, and this will drag the US into a recession.” 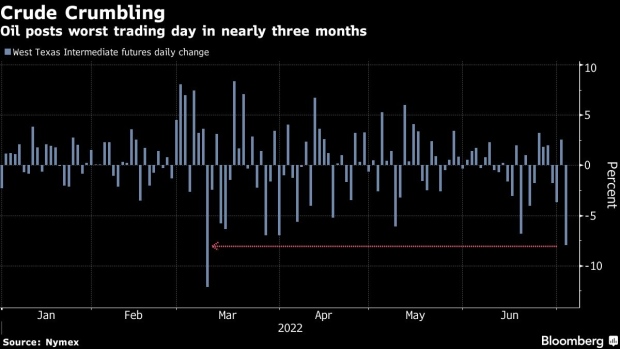 Adding to recessionary fears, Shanghai launched mass testing for COVID in nine districts after detecting cases the past two days, calling into question the demand recovery in one of the world’s biggest oil-consuming countries. The additional testing brings concerns that more lockdowns could be implemented as the city reported several infections Sunday and Monday.

While futures have been pressured by the threat of a global economic slowdown, key market timespreads remain robust, indicating that there’s solid demand for near-term supplies. A strike in Norway and supply disruption in Libya have exacerbated that strength of late.

In welcome news for Biden, retail gasoline prices in the US have eased from a record above US$5 a gallon in mid-June. The national average now stands at US$4.80 a gallon, according to the latest figures from auto club AAA, after slipping for 21 consecutive days in the longest losing run in more than two years.