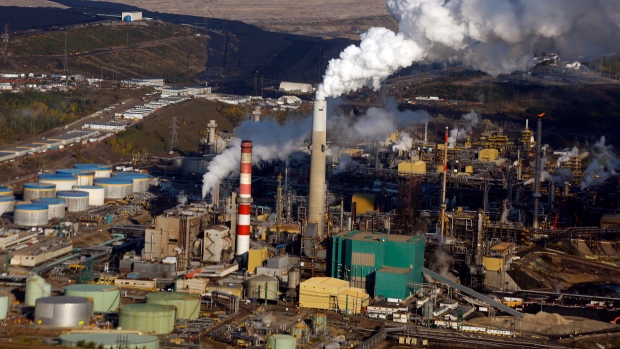 A Suncor oil sands mine facility seen from the air near Fort McMurray, Alta. , The Canadian Press/Jeff McIntosh

Canada’s oil patch “may be on the cusp of a new investment cycle” as oil settles into a US$50-60/bbl range, according to a new report from the Bank of Montreal.

Its numbers show many companies in the oil sands industry can remain economically viable in this US$50/bbl world, with the ability to stay cash positive and hold their production levels for many years to come. The cash breakeven costs on a WTI-equivalent basis are roughly US$23/bbl for in-situ projects, and US$34/bbl for mining developments, according to the report.

The in-situ projects with the lowest cash breakeven points include conventional heavy-thermal oil operations at Pengrowth's Lindbergh and BlackPearl's Onion Lake projects, as well as SAGD operations at Christina Lake run by MEG Energy and Cenovus. Those projects range in cost between US$14-22/bbl. 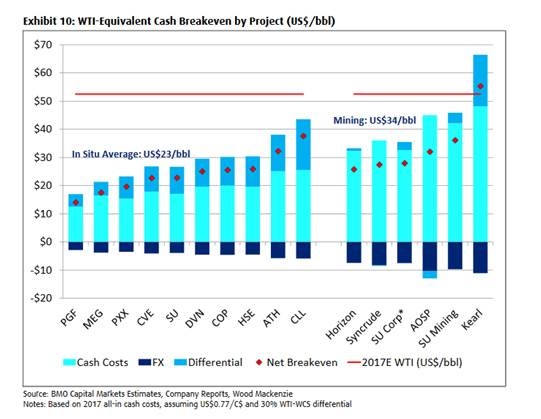 The lowest cash costs in mining operations come in at US$26-28/bbl at Canadian Natural Resources’ Horizon project and the Syncrude project.

The performance of assets varies greatly based on a combination of asset quality and operator experience, according to the report. BMO suggests investors focus on oil sands operations with high-quality assets, strongest balance sheets, and greatest potential for cash flow when the price of oil remains flat. Based on those criteria, BMO's top recommendations are Canadian Natural Resources and Suncor Energy.

"The oil sands industry may be on the cusp of a new investment cycle," wrote Randy Ollenberger, the report’s co-author. "With lower costs and new technologies, we believe oil sands investments can

Although existing oil sands projects are viable at US$50/bbl, many new oil sands projects require the price of oil to increase to the range of US$55-65/bbl. "We believe that new SAGD projects generate better returns on capital than new mining investments, with brownfield expansions offering superior returns over greenfield projects," Ollenberger said.

Even as capital spending continues to decline as multi-year projects end, a combination of expected stronger oil prices and growth could result in an increase in free cash flow, according to BMO. It estimates an increase of roughly 70 per cent over last year's levels -- roughly $33 billion this year and more than $38 billion in 2018. That extra cash may result in companies resuming investment.