Oil climbed by the most in two weeks as a landmark plan from consumer countries to tap their strategic oil reserves was less severe than markets expected.

Futures in New York rose rose 2.3 per cent after Tuesday’s statement from the White House announcing strategic reserve release. While the headline size of the U.S. release is large, a significant chunk of the crude will be borrowed -- to be returned later -- leaving traders expecting tighter balances down the line. The U.S. is making the move in concert with China, Japan, India, South Korea and the U.K.

Oil prices have hit multiyear highs in recent months amid a global energy crisis that’s added hundreds of thousands of barrels a day to consumption, while the world economy is grappling with surging inflation. The decision puts major consumers on a collision course with OPEC+, which views such a release as unjustified and may reconsider plans to add more supply at a meeting on Dec. 2.

“From OPEC’s perspective, a cautious ramp-up is still the way to go,” said Damien Courvalin, the head of energy research at Goldman Sachs Group Inc,, in a Bloomberg Television interview on Tuesday. “OPEC has no incentive to increase production aggressively and the SPR release probably comforts them.” 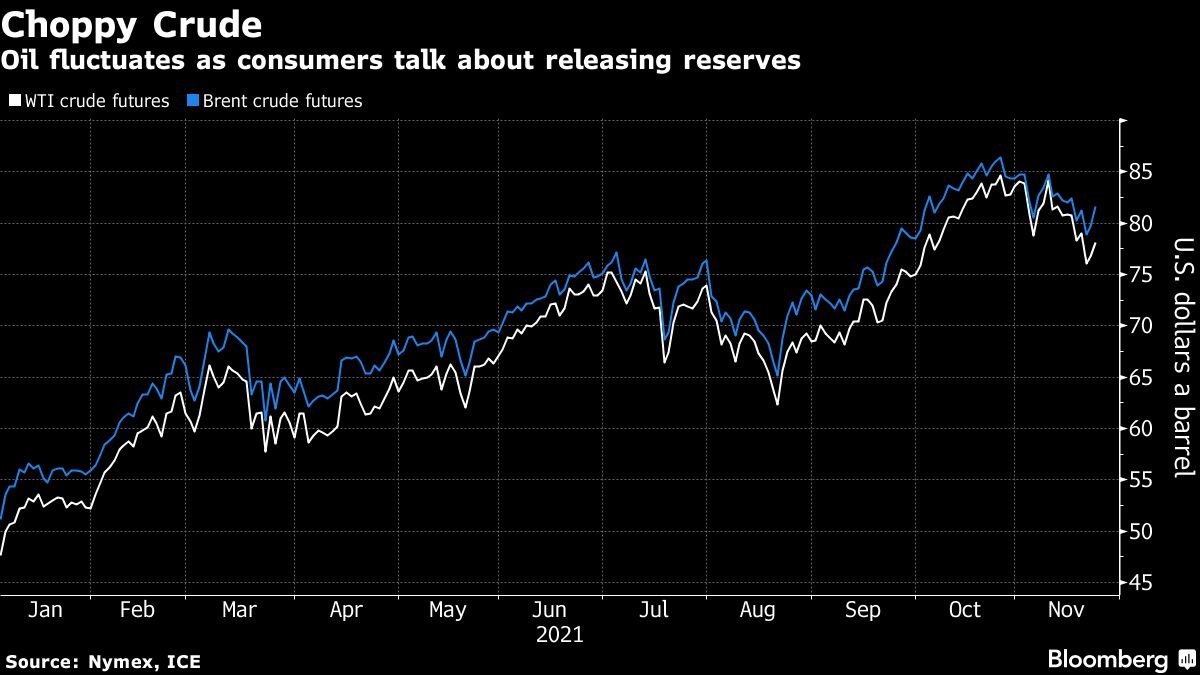 The main announcements so far are:

“The added supply to the market is pretty small in the grand scheme of things,” said Rob Thummel, a portfolio manager at Tortoise, a firm that manages roughly US$8 billion in energy-related assets. “Clearly, the oil price was expecting something bigger than this.”

Despite Tuesday’s rally, crude prices have dropped close to US$10 from earlier this month as the U.S. signaled it may tap its reserves. The diplomatic push has also led to weaker so-called timespreads for nearby months. West Texas Intermediate crude’s prompt spread traded at 56 cents a barrel, down from about US$1.79 a barrel in late October.

In a press conference addressing inflation, U.S. President Biden said that it is unacceptable for gasoline supply companies to pocket the profit instead of passing on savings to consumers. Biden reiterated that his administration will do what is necessary to lower gasoline prices, without specifying steps.

“While our combined actions will not solve the problem of high gas prices overnight, it will make a difference,” said Biden. “It will take time, but before long you should see the price of gas drop where you fill up your tank.”

When asked about the potential for a U.S. export ban in the future, the administration suggested that all options are on the table.

RBC Capital Markets says the U.S. believes it has the ability to release more oil from its reserves if prices rise further. The Biden administration wants to keep prices below US$80 “and believe they have the ability to do another release of a similar magnitude,” RBC analysts, including Helima Croft, wrote in a report on Tuesday.

Focus will now turn to how the Organization of Petroleum Exporting Countries and its allies will react to the release when they gather next week. Speaking before the reserve releases were announced, the United Arab Emirates said there was no need for OPEC+ to increase oil production any faster, despite pressure from major consumers.