Oil pared earlier gains as U.S. President Joe Biden appeared to avoid the harshest sanctions against Russia while Iran nuclear deal diplomacy seemed nearer to a conclusion that could provide some relief to global energy markets.

Futures in New York closed up 1.4 per cent, paring its earlier gains of 5.4 per cent. The international benchmark zoomed toward US$100 a barrel on Monday, stopping at US$99.50, after Russian President Vladimir Putin signed an order to send what he called “peacekeeping forces” to two breakaway areas of Ukraine. Biden announced that they will impose further sanctions on Russia by implementing sanctions on Russian sovereign debt.

“While the action will have economic impact and is an escalation, it falls short of massive economic pain,” said Brian O’Toole a senior fellow at the Atlantic Council who previously worked in the U.S. Treasury Department’s sanctions unit. “I fear at the moment that Putin may not think the West has the stomach to follow through.”

Yet rising prices are being tempered by the possibility of an Iranian nuclear deal. European and Russian diplomats agreed that negotiations over Iran’s nuclear program have reached the endgame, signaling potential relief for global energy markets if sides can agree to settle final differences. Any restoration of Iranian barrels to the global market would help ease tightness as OPEC and its allies struggle to meet its output goals.

“As Ukrainian tensions continue to mount, betting on higher crude prices has become a favorite trade, but expectations of additional Iranian supply has somewhat put a cap on the oil price rally,” said Ed Moya, Oanda’s senior market analyst for the Americas. 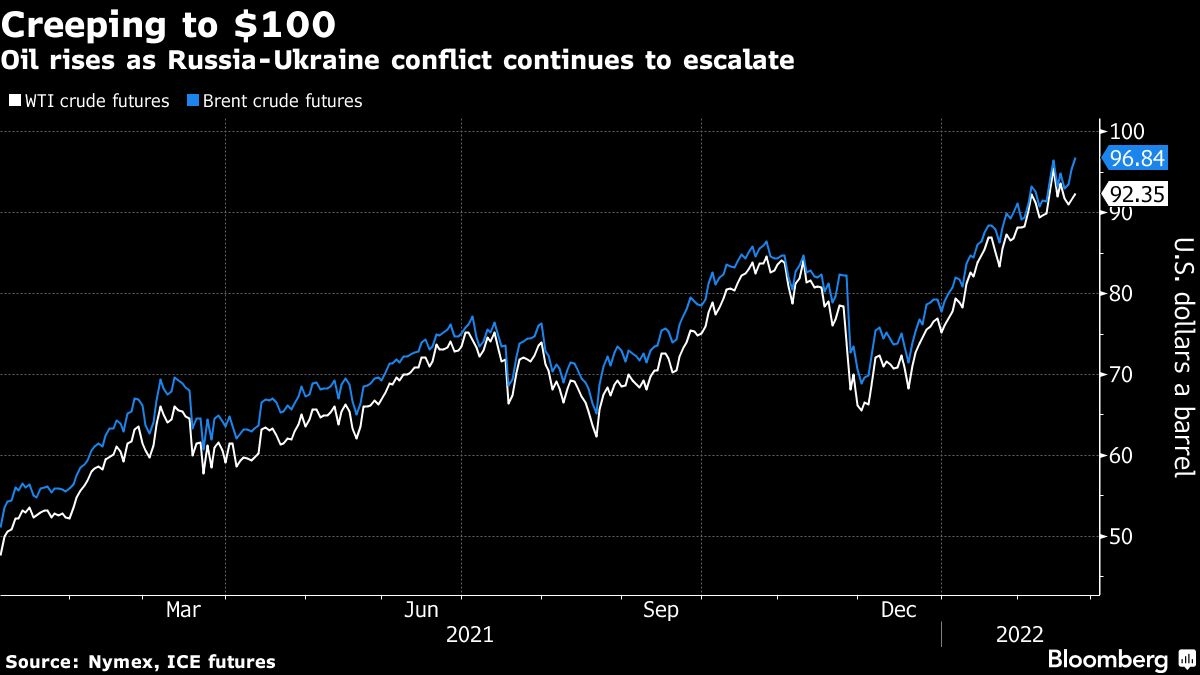 Energy markets have been on edge for weeks, swinging with every twist and turn in the standoff between the West and Moscow. The tensions have added to oil’s blistering rally, which has also been driven by output not keeping up with rising demand. OPEC+ continues to only drip-feed additional supply to the market, and several key members of the production cartel see no need to accelerate output increases even as oil heads toward US$100 a barrel.

Crude at US$100 “isn’t a short-term phenomenon,” Amrita Sen, chief oil analyst at Energy Aspects, said in a Bloomberg TV interview. “The only way to then solve for this market, because you’re not going to get much incremental supplies, is going to be through high prices. Because demand growth has to moderate.”

In addition to geopolitical tensions, oil markets remain severely backwardated, a bullish pattern that reflects tight supply. Brent’s prompt spread-- the difference between its nearest two contracts-- surged to the strongest in a decade as part of a broad strengthening of the global benchmark’s curve. Brent’s open interest also climbed to the highest since November.