We could see US$100 oil by the end of this year: Eric Nuttall

West Texas Intermediate crude rose 3.8 per cent to close above US$81 a barrel, the highest since Nov. 11. Markets advanced quickly during Powell’s testimony as it became apparent the Fed would do little to alter current market consensus. With an interest rake hike largely priced in and not seen before March, the dollar sank, increasing the appeal of commodities priced in the currency.

Powell’s remarks were a “a touch more dovish than what was implied in the recent minutes and suggested by other Fed speakers in the last few days,” said Vital Knowledge founder Adam Crisafulli. 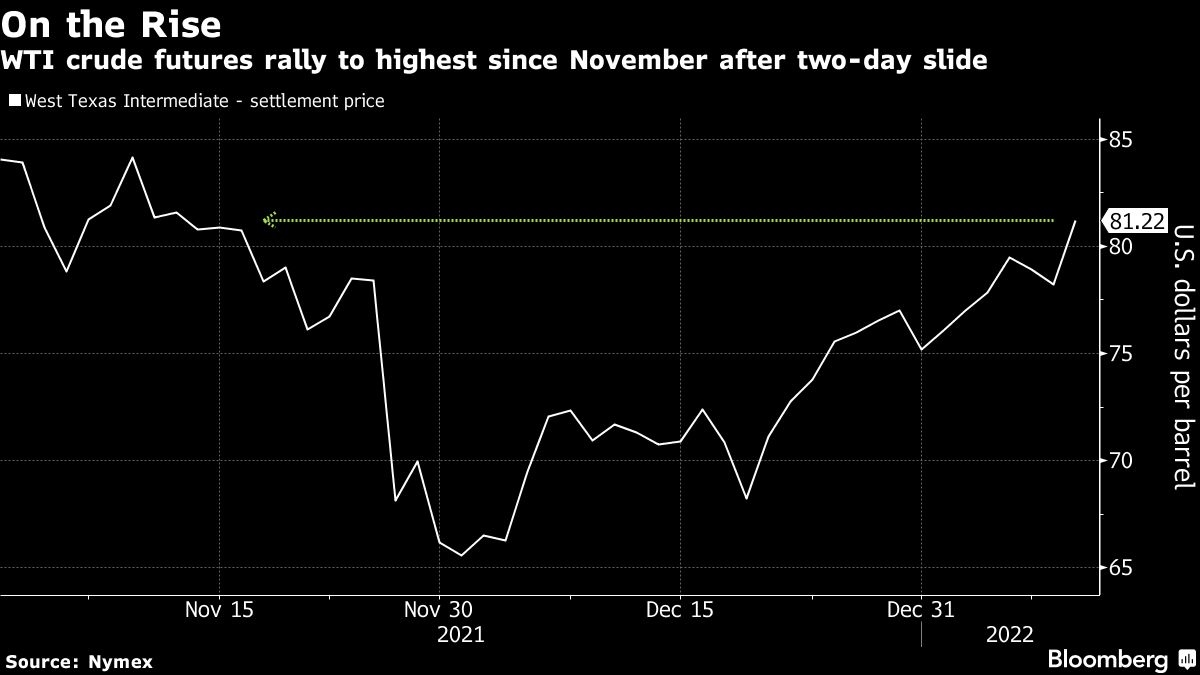 Oil has made a positive start to 2022 on expectations that demand will continue to expand as the impact of the pandemic on fuel consumption gradually eases, tightening the market. In the past few weeks, crude supplies from OPEC+ member nations Kazakhstan and Libya have been disrupted.

Prices rose earlier in the session as traders focused on tightening supplies, with U.S. crude inventories forecast to decline for a seventh straight week. Analysts surveyed by Bloomberg estimate a crude stockpile decrease of 1.85 million barrels for last week, while the industry-funded American Petroleum Institute will release its report on inventories later Tuesday.

“Storage has been down for weeks on end and as long as that continues, the market is going to continue to bid,” said Bob Yawger, director of the futures division at Mizuho Securities USA. “If stockpiles post a big draw, then we will be at the lowest level since 2018,” which would justify WTI trading between US$75 and US$85 a barrel, he added.

U.S. crude production is set to rise a second consecutive year as shale producers ramp up their efforts. Oil output will average 12.41 million barrels a day in 2023, according to the Energy Information Administration. The agency adjusted its estimate for this year to 11.8 million barrels a day.

Still, prices face headwinds from the omicron variant as cities worldwide consider tighter restrictions to curb the spread of the highly transmissible virus. In China, the largest crude importer, authorities have locked down a city of 5 million people, a day after detecting omicron in Henan province.

Meanwhile, diesel markets in Europe and the U.S. are currently among the strongest oil-product sectors. Profits from turning crude into the fuel are at their highest since October in both regions as winter demand picks up, remaining relatively robust in the face of omicron.