West Texas Intermediate for January delivery tumbled 3.2 per cent, while the expiring December contract lost 3.7 per cent. Europe’s Brent skidded 2.9 per cent. The wave of infections in Europe is growing, once again raising the prospect of mobility restrictions that would hit oil demand. Austria imposed a lockdown while Germany introduced some restrictions.

The concerns come as the oil market fixates on the prospect of releases from strategic crude reserves by the U.S. and China. The latter said Thursday it was working on one, while the U.S. has repeatedly said the option to tap its Strategic Petroleum Reserves remains on the table.

“It’s a potent one-two punch for the petroleum complex, when there is a looming supply burst combined with a hit to demand from the virus,” said John Kilduff, founding partner at Again Capital LLC. 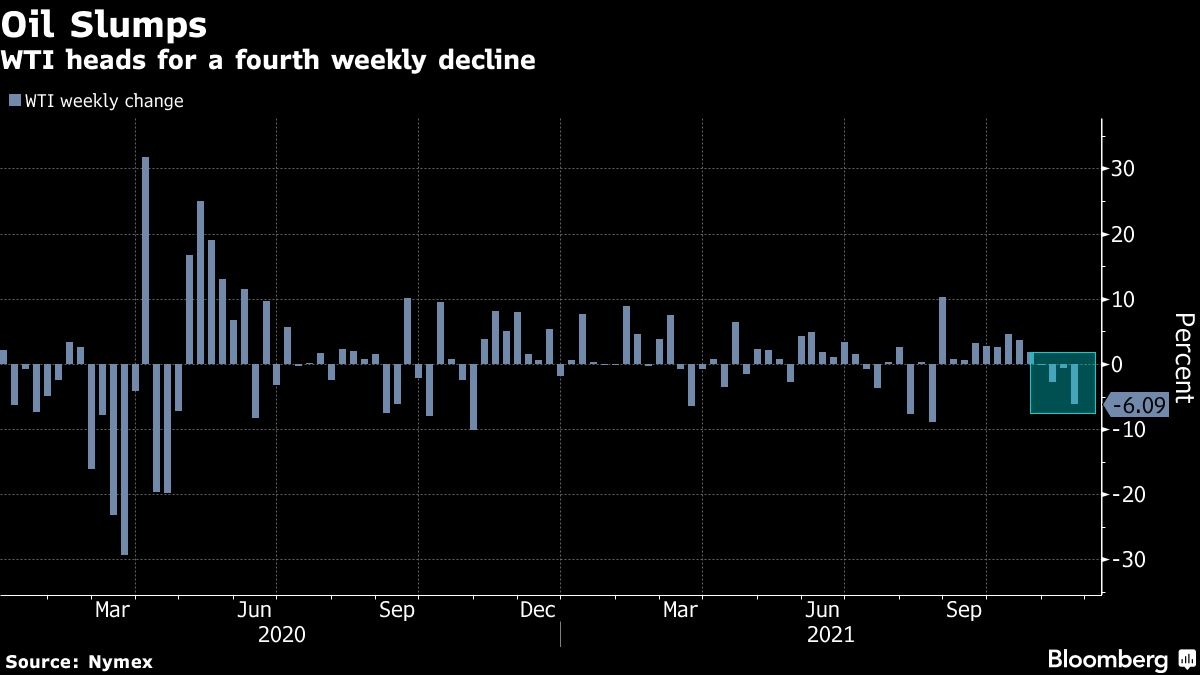 After rising to the highest in seven years, oil has faltered over the past month even as the Organization of Petroleum Exporting Countries and its allies stuck with a cautious approach to restoring output. Alarmed by surging gasoline costs, U.S. President Joe Biden tried and failed to get the OPEC+ group to deliver more crude and then pivoted to a possible release from America’s Strategic Petroleum Reserve. Potential weakness in China’s economy has also contributed to the bearish factors.

Despite the renewed demand fears, Friday’s sell off may have been overdone, according to Goldman analysts including Damien Courvalin and Callum Bruce.  High-frequency inventory data points to a supply-demand imbalance of around 2 million barrels a day over the last four weeks, with OECD crude and Atlantic basin at seven-year lows.

“This magnitude of deficit is in fact on its own sufficient to absorb the current perceived headwinds to the oil bull thesis, with lower prices in fact reducing the odds of a strategic release,” they said in a note.

Meanwhile, the so-called prompt WTI spread continued to narrow as supplies grow at the Cushing, Oklahoma, hub. The January contract settled at 71 cents premium to February futures, the smallest premium since mid-October.

Some traders were still placing bullish bets in the options markets, despite the selloff in prices this week. Contracts that would profit a buyer from a rally toward US$200 traded on Thursday for the second week. While relatively cheap, such bets protect against a potential spike in prices.