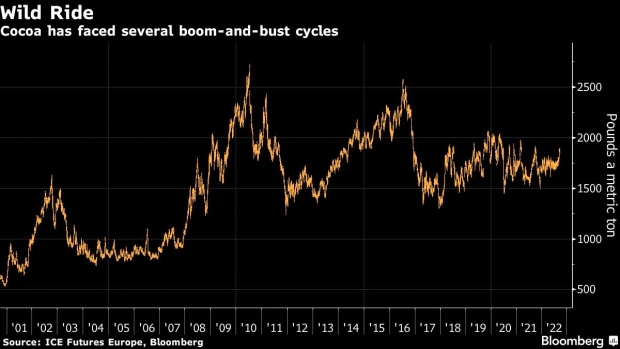 (Bloomberg) -- Europe must work with other regions to prevent its proposed ethical supply-chain rules from becoming a burden for the local cocoa industry, according to Olam Food Ingredients.

The world’s third-largest cocoa processor urged the European Union to reach out to the US and Asia to ensure a leveled playing field, said Gerry Manley, head of OFI’s cocoa business and chief sustainability officer. A coordinated approach also is needed with growing countries so they can adopt the EU rules as production standards.

The EU plans to make companies responsible for human rights abuses and environmental harm in their supply chain, with fines and compensation claims for those who fail to act. Strict rules could put the European industry at a disadvantage if other cocoa-consuming and producing countries don’t follow suit.

“The legislation is there for a reason, to drive better practices,” Manley said in an interview for the launch of OFI’s second sustainability impact report. “What we have to do is to copy that elsewhere in the world. There needs to be that leveled-playing-field approach. If we can use that EU model, and it is fully taken by producing countries to be a standard, then I think we are in a good position.”

Olam can already can trace all the cocoa in its direct supply chain in nine countries back to an individual farm, community, or the first point of purchase -- where a farmer or cooperative is paid. That’s about 60% of all the beans the company buys. Expanding that further will require a coordinated approach and legislation, Manley said.

That’s because some of the beans it buys come from other traders, which adopt different practices. In Ghana, for example, the cocoa supply chain is controlled by the government, and that means OFI can’t count them as its direct supply chain, he said.

Cocoa companies have stepped up sustainability efforts as customers and governments increasingly want to know where food comes from and whether it was ethically produced. But so far, the approach has lacked coordination, with various standards being applied by different companies and producing countries.

Ivory Coast and Ghana, for instance, have joined forces to impose a premium of $400 a metric ton over the futures prices for their cocoa. But the so-called living-income differential has been compensated by a quality discount -- of up to $200 a ton at times -- determined by supply and demand in the market.

In some cases, farmers also aren’t getting the minimum price determined by the state, especially in Ivory Coast.

Olam says most farms are still too small for growers to earn enough. The company -- which has a target of having 150,000 growers in its chain earn a living income by 2030 -- says boosting yields could be a way to help farmers earn more using the same amount of land. Manley says the company can help double productivity to 700 kilograms of cocoa per hectare.

Producing countries have criticized some sustainability practices, blaming previous cycles of overproduction on things like disease-resistant trees. Ivory Coast, the world’s top producer, put a halt on the distribution of higher-yielding planting material in 2018, a ban that’s still in place. As a result, OFI’s distribution of cocoa seedlings globally fell 40% since 2017-18.

“We appreciate where producers come from about oversupply. There has to be a control on that,” Manley said, adding that he believes global consumption is continuing to grow and that the worst-case scenario would be for global shortages to result in such a spike in prices that it would cause consumers to cut back.

“I was in Asia recently and it is such a positive vibe,” he said. “You are seeing double-digit increases, people looking for real expansion of cocoa and chocolate demand. There is a positive outlook out there, and we do need to produce more cocoa.”

Child labor remains a challenge, but the industry has invested in building schools, Manley said. Olam’s goal is to eliminate child labor from its supply chain by 2030. In its recent report, the company still identified over 11,000 cases, none classified as forced labor, another topic on the EU’s radar.

The EU was clear that it wants elimination much earlier, Manley said. “If those processes can occur with the financing that’s needed to go to producing countries and developing nations, then the elimination of the worst forms of child labor can be met.”

“If the world is serious about mitigation of poverty, we have to eradicate child labor,” he said.

(Updates with other report highlights after last paragraph. A previous version of the story corrected the ranking in second paragraph to show OFI is the third-largest cocoa processor)