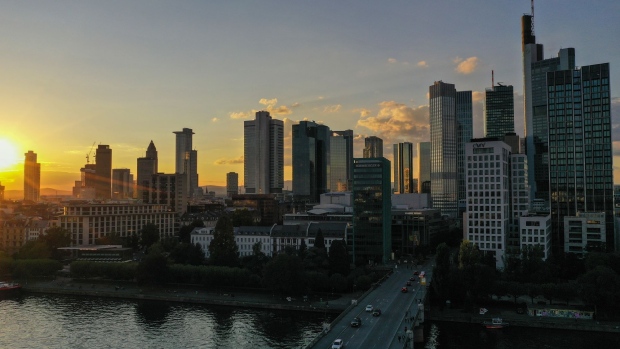 The sun sets over skyscrapers in the financial district in Frankfurt, Germany, on Wednesday, Sept. 2, 2020. Partly thanks to the government’s stimulus program, German activity has staged a strong rebound after collapsing in the second quarter, and companies have turned slightly more optimistic that it will continue to accelerate into next year. Photographer: Alex Kraus/Bloomberg , Bloomberg

One of the biggest shareholders in embattled German real estate firm Adler Group SA sold almost its entire stake after the company was targeted by short sellers.

Fairwater Multi-Strategy Investment sold a 5.5% stake on Wednesday and now owns less than 0.1% of the company, according to a regulatory filing.

Fairwater is the first of Adler’s top shareholders to cut exposure to the company since Fraser Perring’s Viceroy Research published a report alleging that Adler is a “hotbed of deception.” Adler has denied all of the accusations.

After Adler’s shares collapsed, Aggregate announced on Oct. 7 it would refinance existing margin loans with Vonovia SE, Germany’s largest landlord, in exchange for an option on half of its stake. However, Aggregate’s bonds have continued to decline. Notes due 2025 trade at 56.7 cents on the euro, more than 10 cents lower since the beginning of last week, according to CBBT prices.