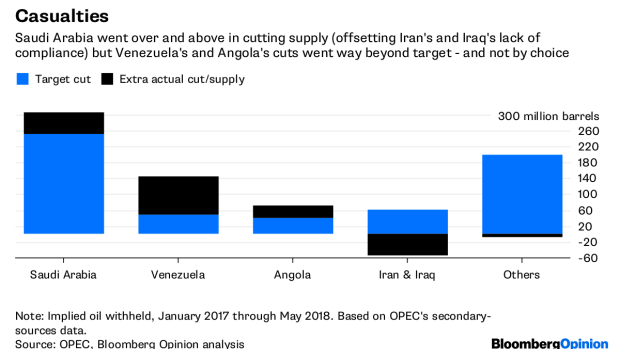 (Bloomberg Opinion) -- The hardest-working oil in the world comes from Saudi Arabia. As the kingdom prepares for next week’s meeting of the so-called Vienna Group – OPEC, Russia and some others – consider a few things those multi-tasking barrels must do:

You’ll notice I didn’t even get into the issue of rival non-OPEC supply, particularly from the U.S., and how it responds to prices being nudged this way and that. The sheer difficulty of balancing all these interests over the long term should be kept in mind as next week’s drama plays out.

Surely, though, the Vienna Group is basking in victory? After all, their supply cuts drained the inventory glut. But few victories come without casualties, and Venezuela’s collapse has been crucial to making the cuts count. Less noticed, but also important, has been the slide in Angola’s output.

From the start of 2017 through the end of May 2018, the targets originally set for 11 OPEC countries imply 600 million barrels being held off the market. They actually withheld 721 million barrels, and Venezuela alone accounts for 78 percent of that extra, ahem, discipline:

As my colleague Julian Lee wrote here, there will be a stark divide in Vienna between a handful of “haves” – countries such as Saudi Arabia that can raise output – and the “have-nots” that are producing flat-out already. The former dominate, given their ability to influence the market by choice.

Yet the mere existence of the have-nots presents a problem that goes beyond next week.

Consider this startling fact from Ed Morse, Citigroup’s head of commodities research: Fifty percent of OPEC’s oil reserves are held by Venezuela, Iran and Iraq, three countries facing pronounced challenges and, therefore, opposed to raising supply targets. Even if they don’t get their way, those 600 billion barrels of reserves lay bare OPEC’s fundamental problem: It is an increasingly unreliable supplier of an essential commodity.

Rystad Energy, a consultancy, just released updated estimates of recoverable oil reserves. These include both discovered reserves and estimates of discoveries “deemed likely.” They differ markedly from the figures in sources such as BP PLC’s annual statistical review, also out this week. Here are the top five OPEC and top-five non-OPEC countries:

This isn’t about one set of numbers being right or wrong. The point is to illustrate that OPEC’s traditional strong suit, size of reserves, isn’t immutable. Take Venezuela. Even if it contains tens of billions more recoverable barrels, that’s a moot point until it reckons with its debts, political dysfunction and rebuilding its national oil company after repeated purges.

Conversely, Rystad estimates Texas alone now holds 100 billion recoverable barrels. Again, on the exact number, who knows? But OPEC has clearly been behind the eight ball on tight oil for years. While logistical constraints present a near-term problem, U.S. output proved resilient to the price crash; and growth is expected to almost match global demand growth this year and cover a majority of next year’s, according to the International Energy Agency. IHS Markit, meanwhile, predicts Permian basin output alone could more than double by 2023 to 5.4 million barrels a day, higher than that of any OPEC member but Saudi Arabia.

The conflicting requirements of Vienna’s crew mean the likeliest outcome next week is a moderate, and paced, increase in production of less than one million barrels a day. Keeping targets steady would risk a price spike – especially if Iranian sanctions prove particularly effective – and displeasure in both Washington and Moscow. What’s more, besides Venezuela, OPEC’s efforts to drain inventories have been aided by strong demand, due in part to lower oil prices:

Conversely, opening the taps completely would turn the hitherto measured exit of speculative money in the market into a rout, causing near-dated prices to plunge and, importantly, flipping the shape of the futures curve. OPEC, meanwhile, would descend into chaos.

Either way, though, the underlying problem remains. That the wishes of a non-member, Russia, carry far more weight than those of a struggling founding member, Venezuela, speaks volumes.

To be effective, OPEC’s members should be able to invest in new capacity and withstand inevitable cycles. Apart from a few concentrated on the Arabian peninsula, they mostly cannot. And assuming that handful do start pumping more after next week, they will by definition reduce their limited spare capacity.

What today’s oil market demands, with the rise of shorter-cycle production sources and growing threats to demand, is access to large, low-cost, flexible sources of production. OPEC certainly has the scale and, at the operating level, cheap barrels.

But one-trick pony economies mean that, for most, the breakeven oil cost is far higher. That, along with everything from weak incentives for outside investment, resource nationalism, and sanctions, makes most of their output decidedly inflexible. OPEC has won a respite for some members over the past year or so. As a tool for steering the 21st century oil market, though, it is painfully blunt, and getting blunter.