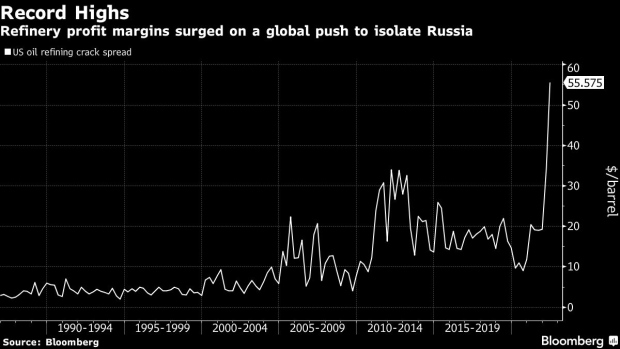 Abdulaziz bin Salman, Saudi Arabia's energy minister, pauses during a panel session on day two of the St. Petersburg International Economic Forum (SPIEF) in St. Petersburg, Russia, on Thursday, June 3, 2021. President Vladimir Putin will host Russia’s flagship investor showcase as he seeks to demonstrate its stuttering economy is back to business as usual despite continuing risks from Covid-19 and new waves of western sanctions. , Bloomberg

(Bloomberg) -- Saudi Arabia’s energy minister said a dearth of refining capacity meant that gasoline and other oil products would remain expensive even if the world’s biggest exporters pumped more crude.

Prince Abdulaziz bin Salman’s reiteration that there are “physical impediments that no producer can solve,” comes as spiking gasoline and diesel compound inflationary pressures that are worsening a global cost-of-living crisis. At the same time, the determination of OPEC+ to stick to modest supply increases -- despite flows from coalition member Russia being disrupted by an international boycott -- has drawn the ire of US lawmakers.

“There is no refining capacity commensurate with the current demand and the expectation of the demand in the summer,” the minister said at an energy conference in Bahrain on Monday.

Prince Abdulaziz’s comments were echoed by Bahrain’s Oil Minister Sheikh Mohammed Bin Khalifa Bin Ahmed, who said the Organization of Petroleum Exporting Countries and its partners are likely to continue to raise output quotas by 432,000 barrels a month.

“There’s no new capacity coming,” he said at the same event. “Even if you produce more crude, there isn’t demand for it, there aren’t any more refineries.”

Fuel prices have surged as efforts to isolate Russia, one of Europe’s most important suppliers, upend international markets. Soaring demand ahead of the peak U.S. driving season is sending refining margins to extraordinary heights, benefiting refiners including Saudi Aramco.