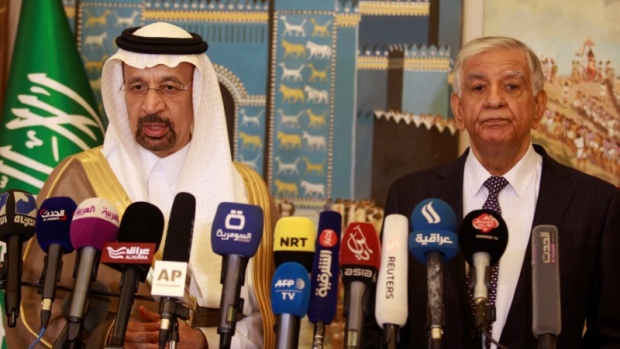 OPEC is likely to extend production cuts for another nine months, ministers and delegates said on Tuesday as the oil producer group meets this week to debate how to tackle a global glut of crude.

OPEC's top producer, Saudi Arabia, favors extending the output curbs by nine months rather than the initially planned six months, as it seeks to speed up market rebalancing and prevent oil prices from sliding back below US$50 per barrel.

On Monday, Saudi Energy Minister Khalid al-Falih won support from OPEC's second-biggest and fastest-growing producer, Iraq, for a nine-month extension and said he expected no objections from anyone else.

The Organization of the Petroleum Exporting Countries meets in Vienna on Thursday to consider whether to prolong the deal reached in December in which OPEC and 11 non-members, including Russia, agreed to cut output by about 1.8 million barrels per day in the first half of 2017.

The decision pushed prices back above US$50 per barrel, giving a fiscal boost to major oil producers. But it also spurred growth in the U.S. shale industry, which is not participating in the output deal, thus slowing the market's rebalancing.

Saudi Arabia's Gulf ally Kuwait said on Tuesday not every OPEC member was on board yet for an extension to March 2018, but most ministers and delegates in Vienna said they expected a fairly painless meeting.

Ecuador Oil Minister Carlos Perez said OPEC and other oil-producing countries would discuss a six- or nine-month extension to output cuts and probably choose the latter.

"Six and nine months are both proposals on the table ... we will support the majority, probably the nine months," Perez, whose country is in OPEC, told reporters after arriving in Vienna on Tuesday.

Asked whether deeper cuts would be discussed, he said: "Not at this point, I don’t think so."

Noureddine Boutarfa, energy minister of OPEC member Algeria, said OPEC was discussing a possible nine-month extension, with curbs kept at the same level as under the group's existing deal.

"Right now we are talking about nine months," Boutarfa told reporters in the Austrian capital. Falih also arrived in Vienna on Tuesday but made no comment to reporters.

"The Saudi oil minister's view seems accurate and no serious objection is expected if at all," said one OPEC delegate, who asked not to be identified as he is not allowed to speak to the media. "No surprises," said a second delegate.

Tehran has kept relatively quiet in the past few weeks, saying it saw a need to extend cuts. Iran is emerging from a presidential election won by the incumbent, Hassan Rouhani.

"It has been some time since we had such a strong consensus going into an OPEC meeting," BNP Paribas's commodities strategist Harry Tchilinguirian said.

"Despite a supply cut extension being factored in by the market, oil prices have made only modest progress. It may take more than an extension to rekindle bullish spirits," he added.

Oil prices initially fell 1 per cent on Tuesday after U.S. President Donald Trump proposed to sell half of the United States' Strategic Petroleum Reserve in the next 10 years as well as to speed up Alaskan exploration.

Two OPEC sources said a one-year extension was also an option, though others said most discussions were centering on nine months due to weak seasonal demand in the first quarter.

Saudi's Falih said on Monday he expected the new deal to be similar to the old one, "with minor changes".

"He (Falih) has talked to several countries including Norway, including Turkmenistan, including Egypt, and they have made signs of their willingness to join the collaboration," Kuwait's oil minister Essam al-Marzouq said on Tuesday.

Norway's oil ministry said later on Tuesday it had no plan to join cuts but had a good dialogue with OPEC.

Deutsche Bank said the market had priced in a nine-month extension.

"The inclusion of smaller producing non-OPEC countries such as Turkmenistan, Egypt and the Ivory Coast would be a negligible boost, in our view," Deutsche said. "A deepening of cuts, though, has more potential to provide an upside surprise."