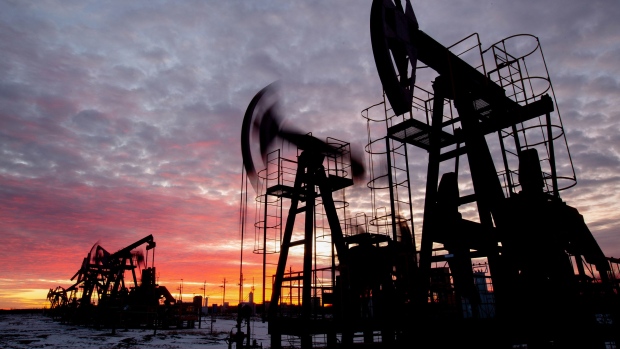 Oil pumping jacks, also known as "nodding donkeys", operate in an oilfield near Neftekamsk, in the Republic of Bashkortostan, Russia, on Thursday, Nov. 19, 2020. The flaring coronavirus outbreak will be a key issue for OPEC+ when it meets at the end of the month to decide on whether to delay a planned easing of cuts early next year. , Bloomberg

OPEC reduced its estimate of the surplus in global oil markets this quarter, the day before the group and its allies consider another output boost.

The findings may encourage the 23-nation OPEC+ coalition to proceed with the modest production increase that delegates say is expected when they gather on Tuesday. The alliance led by Saudi Arabia and Russia is gradually restoring output halted during the pandemic in installments of 400,000 barrels a day.

The Organization of Petroleum Exporting Countries sees a surplus of 1.4 million barrels a day in the first three months of 2022, about 25 per cent smaller than it estimated a month ago, according to internal research being reviewed by the group and its allies on Monday. The main driver of the change was a weaker outlook for supply from the coalition’s rivals.

The overall picture for 2022 is also slightly stronger as a result of a more robust demand outlook, with an average full-year surplus of 1.4 million barrels a day instead of the 1.7 million seen by the committee last month. The report, compiled by OPEC’s internal research department in Vienna, is being assessed by the alliance’s Joint Technical Committee on behalf of ministers.

Oil futures rose as Libyan output was disrupted by a damaged pipeline. West Texas Intermediate crude gained 0.7 per cent to US$75.76 a barrel at 7:16 a.m. in New York.

OPEC reiterated that it sees a “mild and short-lived” impact from the omicron variant, as “the world becomes better equipped to manage COVID-19 and its related challenges.”

The report also indicates that OPEC+ could face deeper surpluses later in 2022. The group has said several time that it has the option of pausing or even reversing its scheduled supply increases if needed.