Oil Market to Return to Surplus in 2022, ING Says

OPEC+ officials warned they’re likely to respond to plans by the world’s largest oil consumers to release oil from their strategic stockpiles, setting up a fight for control of the global energy market.

President Joe Biden is set to announce a plan to release reserves from the Strategic Petroleum Reserve on Tuesday in tandem with China, India, Japan and South Korea, according to officials briefed on the matter. The move, weeks in the planning, is designed to ease this year rise in fuel prices for drivers and businesses.

OPEC+ delegates said the release of millions of barrels from the inventories of their biggest customers is unjustified by current market conditions and the group may have to reconsider plans to add more oil production when they meet next week.

The tussle threatens the biggest ructions in the geopolitics of oil since the price war between Saudi Arabia and Russia in early 2020. At stake is the price of the world’s most important commodity as politicians and central bankers contend with the strongest inflationary surge in more than a decade. It also shows the strained relationship between Washington and Riyadh, traditionally a cornerstone of U.S. relations in the Middle East.

The situation remains in flux and the plans could change but the U.S. is considering a release of more than 35 million barrels over time. The pending announcement was described by people who requested anonymity prior to official statements.

“Such a move would potentially raise the stakes in the oil poker game and could produce new strains in the bilateral relationship between Washington and Riyadh,” said Helima Croft, chief commodities strategist at RBC Capital Markets LLC.

Despite the imminent stockpile release prices rallied almost 1 per cent in New York to US$76.63 a barrel as traders weighed the prospect on OPEC+ response. 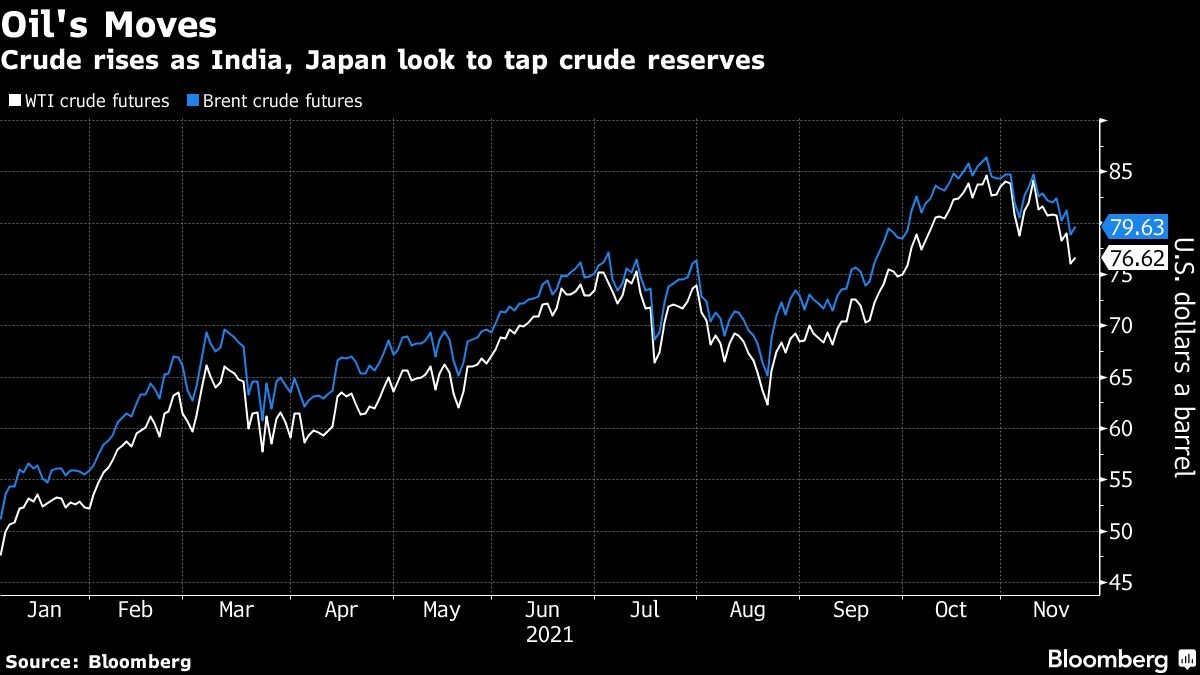 The 23-nation alliance already rebuffed calls from U.S. President Joe Biden and others earlier this month to speed up the return of supplies halted during the pandemic. Delegates, declining to be named discussing private deliberations, said that even the modest production increase they have penciled in may now be re-evaluated when the group meets next week.

“I anticipate OPEC+ energy ministers will maintain their current plan of adding more supplies to the market gradually,” Joseph McMonigle, Secretary-General of the Riyadh-based International Energy Forum, said in a statement Monday. “However, certain unforeseen external factors such as a release of strategic reserves or new lock-downs in Europe may prompt a reassessment of market conditions,” McMonigle said after a meeting with a Japanese foreign ministry official.

For Biden, the coordinated release would mark a diplomatic win for the U.S., especially given the involvement of China. The matter was discussed with President Xi Jinping in a virtual summit last week.

His battle to bring down prices stands in contrast to his predecessor Donald Trump’s effort to persuade Saudi Arabia and Russia to end a price war in early 2020 that crashed prices during the start of the coronavirus pandemic.

It also shows that in an inflationary environment, where prices of everything from cars to meat are rising, large economies have a lower pain threshold for oil prices. During the Obama administration oil spent years above US$100 a barrel without it becoming a political flash point.

The move would represent the largest discharge of stockpiled crude from major economies made outside the auspices of the International Energy Agency. Previous global efforts to tap stockpiles -- such as the 2011 release of 60 million barrels in the wake of unrest and supply disruptions in Libya -- were coordinated by the IEA, of which China isn’t a member.

Biden’s decision to marshal support from China, India, and Japan, pulling together the world’s top four consumers, will go down badly in Saudi Arabia, traditionally on American’s closest allies in the Middle East.

Since taking office earlier this year, Biden has refused to deal directly with the kingdom’s de facto ruler, Mohammed bin Salman, who he blames for the murder of journalist and activist Jamal Khashoggi.

The Organization of Petroleum Exporting Countries and its allies will meet on Dec. 2 to contemplate an increase of production by 400,000 barrels a day in January.