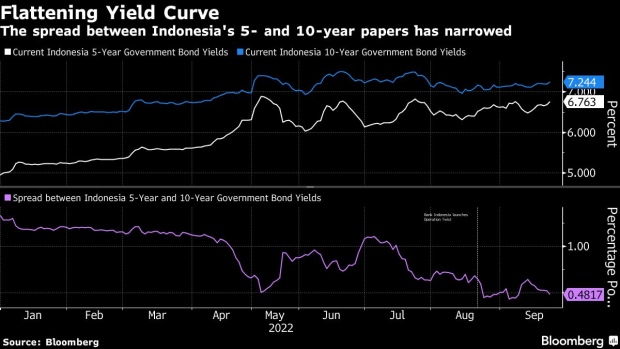 Residential buildings, back, in the Tanah Abang area of Central Jakarta, Indonesia, on Monday, Aug. 22, 2022. Indonesia is expected to continue bucking the trend of monetary policy tightening although signs that the government may boost fuel prices could convince the central bank to signal a readiness to act to tame inflation. Photographer: Dimas Ardian/Bloomberg , Bloomberg

(Bloomberg) -- Bank Indonesia will continue with its “Operation Twist”-style bond intervention to hasten the transmission of its monetary policy in a market awash with cash.

“During normal times when we adjust the interest rate, the yield would also adjust, but when liquidity is ample it becomes divergent,” he said during a conference call with investors. Bank Indonesia holds over 25% of outstanding government bonds as of Sept. 21.

Bank Indonesia has resorted to an array of tools to underpin the rupiah and get inflation under control, including a bigger-than-expected 50-basis point rate hike on Thursday. It’s raised the reserve requirement for lenders to a record-high 9%, from 3.5% at the start of the year, to pull 269.3 trillion rupiah ($18 billion) from the banking system so far. The central bank will also strengthen its monetary operations to adjust the structure of money market rates.